Beyond or beside Google: Week 1 - Teoma

The first week of my search experiment is over. For the past week, I've used Teoma as my primary search engine. Teoma (pronounced "chawmuh", although I really can't bring myself to say it that way) took a page from Google's book and adopted a minimalist interface while using sophisticated context-aware algorithms to rank pages. About a year after founding, Teoma was acquired by Ask Jeeves and it is now the technology behind Ask and related sites, all owned by IAC Search & Media.

As teoma.com itself is still active, that is the site I have used for the past week. Since it also powers ask.com, that has been my first fallback option when I couldn't get what I needed from teoma.com itself. Both sites use the same crawler (user agent: Mozilla/2.0 (compatible; Ask Jeeves/Teoma)) and in some cases the search results appear to be the same, though in a somewhat different order. In other cases, they are very different.

Ask.com often returns many more results and apparently has some natural language search capabilities, yet there also appears to be quite a bit of overlap. This was particularly obvious when searching for ffmpeg on both sites. This brought up a link to Wikipedia which was accompanied by a very small image of the ffmpeg logo. Wikipedia links were the only ones where I've seen images on Teoma search results. The logo image was distorted, possibly due to incorrect conversion from the SVG original and the image src urls were identical on both engines. 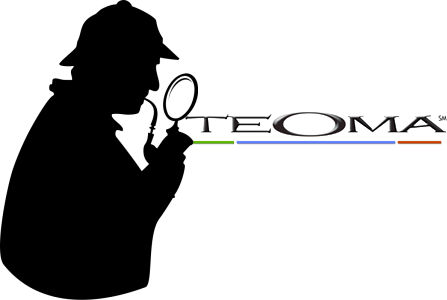 Of all the engines out there, Teoma probably has the cleanest interface. If you thought Google's homepage was lean, check out Teoma. They have their logo, the search field and button, the word "web", two links and a copyright notice. That's the only visible items on the page. Invisibly, you can also find tracking code for (oh irony of ironies) Google Analytics. The minimalist design is carried through to the SERPs. When you look at those, you may be forgiven for thinking you're looking at a Google SERP, as the layout, wording and colour schemes are so similar. I half expected to see the little coloured o's above the page numbers too. Whereas Google puts its "related searches" at the bottom of the page, when it shows them at all, Teoma shows them for pretty much any search and places them at the right hand side. I found this to be very convenient as they catch the eye more easily, yet still unobtrusively. In the past week I've clicked them a few times, which I have done not once on a Google search... ever. This makes good use of the widescreen displays many of us now use.

Teoma appears to be pretty good at finding relevant matches for most of my more technical queries, which meant that I didn't have to dig deep into the search results and found what I needed quickly and easily. Possibly due to the context-aware link evaluation system they use, Teoma seems to favour older pages quite heavily over some bigger, more recent and arguably more reputable ones. I was surprised to be directed to pages roughly a decade old, rather than e.g. w3schools.com when searching for some info on HTML, CSS or JavaScript reference. As the information found on those pages was relevant, it didn't matter much, but it was an interesting experience.

It works just fine on Lynx. The pages are so simple that this may be one of the few sites on the web where you might not notice that you're using a text mode browser.

For news searches, Teoma is just flat out useless. On Monday, the Dutch navy assisted a hijacked German ship. I searched for some info on this on Wednesday using the term Dutch navy German ship. The results contained not a single relevant page for this event, the top result being a page that is riddled with PHP warnings and has no actual content, possibly because of a now-expired session ID being present in the indexed URL: http://www.wtopnews.com/?nid=387&sid=1527662. Trying the search with some quotes added, as "Dutch navy" "German ship", returns another and equally irrelevant post: http://www.iol.co.za/index.php?set_id=1&click_id=85&art_id=nw20080721115406141C538282, which is a year and a half old news article on something entirely unrelated. Oddly enough, both those links have some relation to Africa. I wonder what's going on there.

While minimalism in the interface is a good thing, Teoma applies the paradigm to the entire experience. It does only web searches. No news search, image search, no video or maps, no calculations. No nothing. So little that I was surprised to find that the "site:" operator is supported. The image search in particular is a feature I've sorely missed, frequently finding myself falling back to the Ask.com image search and not getting useful results there, back to Google.

Minimalism in the interface notwithstanding, Teoma can show extremely large numbers of sponsored links. In one case, they were numerous enough to require scrolling down (at 1920x1080 resolution) to see the first non-sponsored search result. What makes this all the more annoying is that it is very difficult not to click them. The very light blue background can be nearly invisible on LCD screens viewed under certain angles and this entire background area will redirect to the sponsored link when clicked, unlike the regular search results where only the result title is clickable. This makes them more obtrusive and annoying than the sponsored links on Google or Bing.

The aforementioned search for ffmpeg yields links to ffmpeg.mplayerhq.hu and ffmpeg.org, which are identical (even resolving to the same IP address) and should have been folded into one in the index (Ask.com does do this).

When visiting the Teoma front page with a BlackBerry Storm, the entire page remained blank as if the connection had been dropped. The "Teoma Web Search" in the title bar and the (Ask.com) favicon being displayed were the only indicators that this was not the case and that it must be the result of an incompatibility between Teoma's HTML and the BlackBerry browser. That's quite a feat, given the minimal page content. Other mobile browsers such as iPhone Safari and Nokia S60 browser had no trouble with the site.

Although it has a generally clean interface and does well on simple factual knowledge queries with easily defined search terms, Teoma doesn't have much going for it. It's index appears dated and I think the no-frills approach has been taken a little too far. It made me realise how useful image search is. I also found myself missing the ability to learn, well, anything about Teoma and the people behind it... it lacks personality, for lack of a better word. I even had to create a search engine definition myself to be able to add it to the Firefox search box as there simply wasn't a working one on Mycroft (there is now, as I submitted mine). All that made me feel as dispassionate about doing a search on Teoma as I do about handcrafting the URL for that search. I may try out the related Ask.com more thoroughly in the future, but I don't see myself ever returning to Teoma for anything after this experiment ends.