Sierra AGI games had a limited vocabulary for their command parser, but they allowed some synonyms from their word list, including some common misspellings. They also tended to just carry the list of synonyms from one game to another, so there are references in there to other games. I decided to abuse that system to get through the game with some of the weirdest commands I could find. 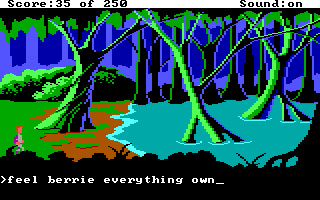 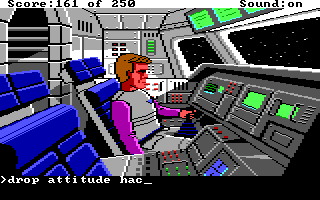 There were many synonyms for common commands. For instance, one might expect pick up, take and get to be synonyms, but the games also accept acquire, gather, grab, pick (without "up"), rob and swipe. Some synonyms were marked for removal from the input. This includes many adjectives, articles and prepositions. This makes the parser a bit more user friendly and seem to be more intelligent than it actually is. Especially the words that are removed from the input basically allow you to inject those anywhere into a command and still have it work. For the parser the look over little a box an is absolutely identical to look box and will thus be accepted without issue.

Normally, one would press the Tab key or even Ctrl-i to open the inventory, but it is also possible to just type inventory or search pockets. That latter one allows for some unusual synonyms, leading to probably the best command ever to display a list of what you're carrying: frisk eva suit.

Apart from the synonyms for a game applying to every use of that word in the entire game, another thing Sierra did was to just carry a dictionary over from one game to the next, where they didn't seem to bother cleaning up the things that were specific to that game. This makes sense for things like all the synonyms to pick up an object, or to look at something, but things get weird when there are references to certain items or characters from that earlier game.

Things carried over to Space Quest 2 from its predecessor are references to Keronians (the planet on which Roger ended up in the first game was called Kerona) and in that game you could redeem coupon which amounted to giving it to the salesman, which now makes it possible to redeem square rather than throw puzzle at the Labion Terror Beast.

Get in the zone

To discover the strangest commands, I dumped the dictionary and command list and went to work creating what I call the SQ2WTF walkthrough. Feel free to download it and try it out! If you prefer watching video playthroughs, enjoy what is probably the craziest way anybody has ever played Space Quest 2 right here:

Note: the reason I don't get maximum points at the end is because I didn't linger on the jungle screen long enough for the hovercraft to show up. The 5 missing points are from hiding from it behind the large tree.