After being very tight-lipped about their plans for the next version of Windows, Microsoft have now officially given the first demos of the the next generation of Windows, called "Windows 8" for now. It is a mix of the live tiles from Windows Phone 7's "Metro UI" and the traditional Windows 7 UI. Everybody and their uncle will have an opinion on this. Here's mine. What I've seen leaves me with mixed feelings. As a casual tablet user, I'm loving it. As a deskop PC worker and power user, it fills me with dread. 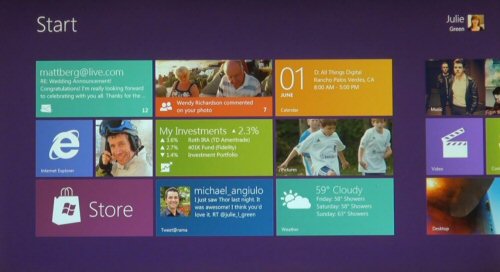 Windows Phone 7 devices have not (yet) had a big impact on the smartphone market, but with the partnership between Nokia and Microsoft I think it reasonable to assume that WP7's marketshare will start increasing. Deservedly so, as the system is clean, uncluttered and slick and seems perfectly suited for smartphones. A worthy competitor for Apple's iOS and Google Android.

Windows has traditionally run only on the Intel x86 and derived architectures (with the notable exception of Windows NT and even release candidates of Windows 2000 which also ran on the DEC Alpha and some other RISC architectures). Windows 8 is to be taking a radical departure from this, also supporting the popular ARM architecture used in many mobile devices and indeed tablets. Note that this will not mean it can run existing Windows applications built for x86 PCs. On ARM, Microsoft can start with a clean slate without having to support 25 years' worth of legacy software.

Microsoft have gone to great lengths to make the Windows 8 UI touch-friendly, drawing off the experience gained from WP7. Compared to a smartphone, these tablets have much bigger screens and the new UI reflects this, making the tiles much bigger so more information can be displayed on them. Not only that, but it is also possible to have separate apps side by side in a split-screen view. The video does not make it clear if more than 2 apps can be shown side by side or whether apps can also be shown stacked vertically. 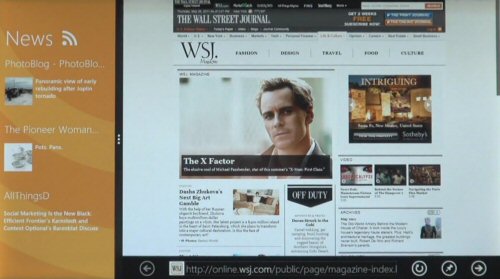 This is a great idea, as people generally use a tablet to focus on a single thing, mostly browsing the web, but often want to keep something else in view such as Twitter or MSN Messenger. Other than through notifications, the other tablet OS'es don't seem to have a proper way of handling this. The demo shows a highly responsive UI and the touch gestures seem intuitive enough to make using a Windows 8 based tablet a pleasurable experience.

People use desktop PCs differently from tablets. Many people do indeed have lengthy leisure browsing sessions, watching YouTube videos, playing music or downloaded movies and organising their family photos. In recent years, such things have often moved to laptop computers, netbooks and tablets or dedicated media center devices. This is great, as you can then do this sitting in your comfortable lounge chair or on the couch without being stuck to a desk and office chair. That's not all we use PCs for, however. On a PC, we tend to keep multiple applications active, switching frequently between them and many of us actually have to do our day to day work on a PC to a greater or lesser extent.

Currently, I have 3 browsers open, with a total of 16 tabs, Visual Studio, an image editor, a handful of PuTTy windows, my e-mail client, a few Explorer windows, WinSCP, clients for MSN and Skype, a media player and a text editor. Some of those are maximised, others in windowed mode, some are are always on top, plus there's probably a BitTorrent client hidden in my taskbar notification area. For me, that's typical PC use and for working with those things the standard windowing system works great. During the demo, Jensen Harris shows regular Excel 2010 running on Windows 8 too. Let's have a look: 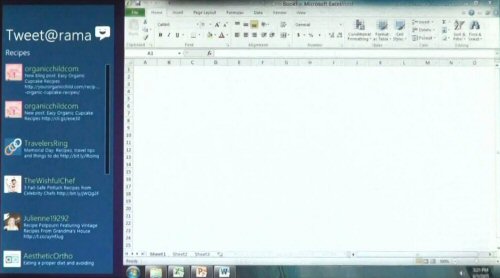 Excel on a regular desktop next to a Twitter feed

Uh-oh. That looks quite jarring to me. Normal Windows application run on the standard Explorer desktop which every PC user in the world is familiar with complete with its own taskbar, start button and the familiar window chrome. This gives the feeling of either Windows 7 with a tacked-on Metro UI or of a new system that runs a virtualised Windows 7 desktop as an embedded/child app.

Touch UI on the desktop

While it works nice for the browser and a few widgets such as on a tablet, I think that when people actually work with a PC, be it in a business or at home, they will prefer the regular desktop. A touch-based UI is fine for a tablet or smartphone, but on a desktop PC it doesn't make sense. Even though touch-enabled monitors are now available, the angle and position at which they're placed doesn't make for an ergonomic experience. Would you rather scroll your mousewheel or reach out to your monitor and swipe your finger up the screen to scroll? That would get rather tiring. The same goes for accessing the start page.

Did you know you can open Windows 7 jump lists by right-clicking on the taskbar button? Did you know you can open them by dragging your mouse cursor up while holding down the left mouse button? That second method is because Windows 7 already started supporting touch events. Go ahead and try it. I think you'll find that the right-click method is much more comfortable and efficient.

Having large tiles on a start screen makes a lot of sense for touch-based UI. Using such separate screens on a desktop PC running multiple applications doesn't. If I want to start up an image editor or a game, why would I want to scroll through several screens worth of tiles showing me the weather (I can see that just fine by looking out the real-world window, thank you very much), latest Tweets, Facebook status updates and a slideshow from my "My Pictures" folder? Such things work much better as desktop widgets.

The interface Microsoft have demoed looks to me to be excellent for tablets or even set top boxes. For the desktop, not so much. Many people who want to do actual work with their PC will likely find it to be in the way and will attempt to bypass it as much as possible (assuming that it is possible).

Even the much-emulated Apple, which is often attributed near god-like qualities when it comes to interface design and useability, has not (yet) tried to combine the user interface of their tablet and smartphone OS with that of its desktop OS even if the backends do become ever more unified. I'm no fan of Apple's UI, quite the contrary, but I do think they deserve credit in this case. Don't try to mix and mash things that are so distinct and deserve to be distinct. You can be sure Apple have researched unifying the interface and they have chosen to either not do it or have simply not found a way that isn't fatally flawed.

I hope Microsoft will take a long hard look at this and realise that these are different kinds of devices for a reason and that people use them for different things in different ways. Operating software for such devices should separate products or at least separate frontend shells for a single backend kernel.

What do you think?

Nice to see another of your comprehensive, well-argumented posts. Thank you for taking the time to write these!

As a slow-adopter (no smartphone or tablet for me yet!), it's still useful to keep tabs on current developments. By the time I do switch to tablet and/or smartphone, I'll be able to make a better, more informed choice!

Much better to have more developed tablet for microsoft and never have a combination of any devices.

I really like your article and looking forward to Microsoft to release Windows 8.

Thank you for a nice website. I read your opinion about windows 8 and I too am a power user, but also a software developer with much background in the graphic arts.

It is obvious that the direction of hand held devices iPod, Kindle, etc are increaingly taking is a complete departure from traditional methods of input (i.e. keyboard, mouse). This may be OK for portable devices with no desk space, but eliminates the vast flexibility of user selection we have today in personal computers, such as opening multiple windows, having spanning desktops with more screen area, etc.

The other underlying issue is that many people are challenged when using a keyboard and if they have no formal typing training (or even non-literate in third world countries), they can still use and operate completely graphic oriented systems.

I think the best way to go would be to BRANCH NOW and develop and maintain two completely different operating systems: One for power users and one for portable devices.