I've been working a lot on the site structure lately and it is now time to make a few changes in the presentation department as well. The orange design this site had until just now dated back at least 6 years and was beginning to look rather dated. 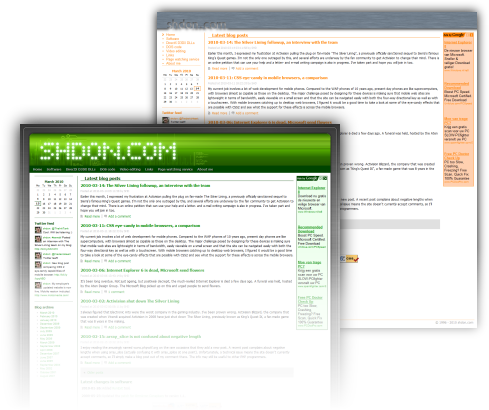 The design changes are accomplished almost entirely by simply applying a new stylesheet. There's some CSS2 features (notably, rounded corners and drop shadows) that aren't supported in Internet Explorer, but as the French say, "c'est la vie". I'm not going to spend a lot of time doing workarounds for eyecandy on that browser, when the next incarnation is likely to support those features anyway.

I'll probably be tweaking a few things in the coming time, but all in all, I'm happy with the new look and I hope you'll like it too.

No animals were harmed in the making of this website.