iTunes missing settings for importing and burning CDs and DVDs

Apple make some really nice hardware and maybe the software they create for the Mac is good, but their Windows developers must be complete morons. Although I think iTunes for Windows is probably the second-worst piece of software ever to be released, I do occasionally use it when I have to transfer music to my iPod. For a while now, it had been throwing up this error message an error message about how "the registry settings used by the iTunes drivers for importing and burning CDs and DVDs are missing". 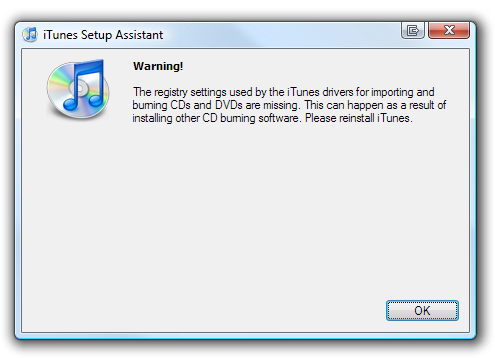 Since I'd never actually use the piece of utter crap that is iTunes for anything other than transferring music and don't even want to think about using this rubbish for ripping, much less burning CDs and DVDs, I ignored the message. Unfortunately, the idiots that developed this crud didn't think of adding a "never bother me about this again" checkbox to the dialog box. Clicking "OK" allows iTunes to start, but when you start iTunes again, it'll complain, again. Well, duh, I didn't bother fixing it because I don't care about the problem! That said, even if I had tried reinstalling iTunes, web searches suggest that that doesn't work anyway.

Eventually it was the frickin' dialog box that annoyed me into "fixing" the problem, cursing under my breath and imagining how to do painful things to Apple developers. Anyway, the solution is to:

Or, you can save yourself the trouble and just use the registry file I've created for you.

Why iTunes doesn't just ask the user whether it should restore the registry settings (or better yet: just do it) or at least has the courtesy to stop complaining when the user doesn't want to bother fixing the problem is beyond me.

Update (2010-01-04): How come they're smart/considerate enough to complain only once when you uninstall that other piece of rubbish that comes with iTunes, "Bonjour"? (In)consistency ftw!

Thanks, for posting that registry file it fixed the problem quick. that pop up was annoying, i disregarded it all the time till i read your post. I recomend this fix to anyone dealing with this very same problem.

This darn error message has been driving me bonkers for months...and you, my dear fried, have fixed it in approx 5 seconds...I am forever greatful...Alan

Thanks Dude this fix helped alot

Thank you very much for your help. This error message was driving me crazy for so long. May the Lord continue to pour blessings upon you......Maribel

Thank you, you have saved me many hours of iPain

THANK YOU. that registry error has been pestering me for years and when I went to back-up all my iTunes music files, I could not burn them. I am running Windows 7 Professional and the registry file you created worked fine.
God Bless you
Richard Anderson
Indianapolis, IN USA

That message was driving me nuts. I reinstalled twice and was still getting
that warning message. I also use itunes only to transfer music to the ipod
or listening to the radio or music. It seems that it is all it is good for.

Same experience as all listed above (many reinstalls, argh). Your excellent directions fixed, no fuss no muss.

thank you thank you so much
its quik,easy.....it's almost 1 month i am so frustrated...you are hero !
i am so greatful having your help

Hey dude I had same experience. No joy with all the so called solutions until I downloaded your registry file. You are a star. Thanks.fKdC

Manual reg editing hadn't worked for me nor had many uninstall and reinstalls--your registry file has finally done the trick, thanks very much.

Yahoo!!!It Worked,,That Pop-up Is Gone,To Say I Was Skeptical About Running The Program,But After Many Re installs And Nothing Seemed To Work,So I Took A Shot In The Dark And Kaboom!!! Zapped That Bugger Out Of There,Thank You Very Much For This Fix!!! I Recommend This For Folks Having The Same Problem,,,,5 Starr