Adventure Jam 2021 concluded last Friday and, as there was quite a bit fewer entries than in previous years, I played through all the entries in a couple of days. Many familiar faces have joined in the fun of making a game for the jam, as well as some new ones. In previous years, I selected a dozen or so of my favourites, but now I've had to limit myself to a mere 9 (as well as some honourable mentions, of course). Again, shamelessly catering to my own tastes in adventure gaming, in alphabetical order, these are my favourites:

Definitely check out those, as well as the many other entries. Adventure game fans are sure to find something to like there! And of course, I've also participated myself with the ridiculously long titled The misadventures of Jeffrey Jetsam. Shouldn't that be flotsam? No, trust me on this one. .

All Demons Must Go To Hell 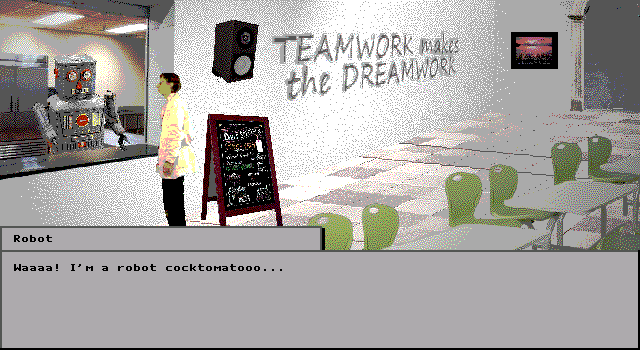 Nobody was more surprised to find out that this is on my list than the creators of this monstrosity. This game should come with a mental health warning label as it is designed to be aggressively user-hostile. You need a lot of determination to make it through, which the game aptly defines as "the dogged inability to recognize and acknowledge impending failure". (Something I'm sure the Space Quest Historian feels applies to programming the game). Why do I put it up here anyway? Because it is unique, surprising, and it made me laugh and my hair is too short for me to be able to tear out too much.

Check out All Demons Must Go To Hell, by The Adventure Think Tank 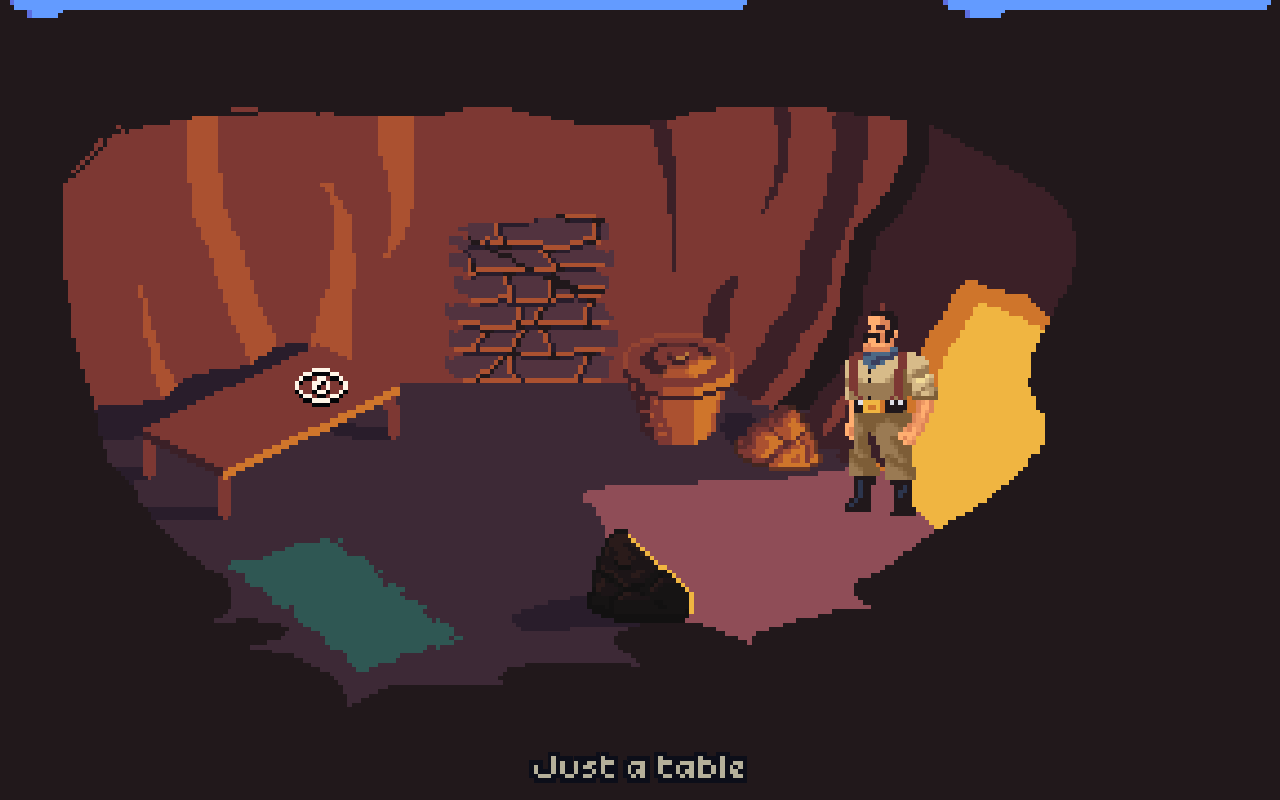 Creator Dom De Re was a bit worried he'd spent too much time on fiddling with the graphics and didn't get enough done to make a proper jam game. But time pressure is a fact of life with game jams. This entry is nothing to be embarrassed or disappointed about. Sure, an extra week would have made the game truly amazing, but what is there is a cool story, with some good puzzles and a style of pixel art that I personally like very much.

Check out The Cavern Echoes, by irreverentpixelfeats 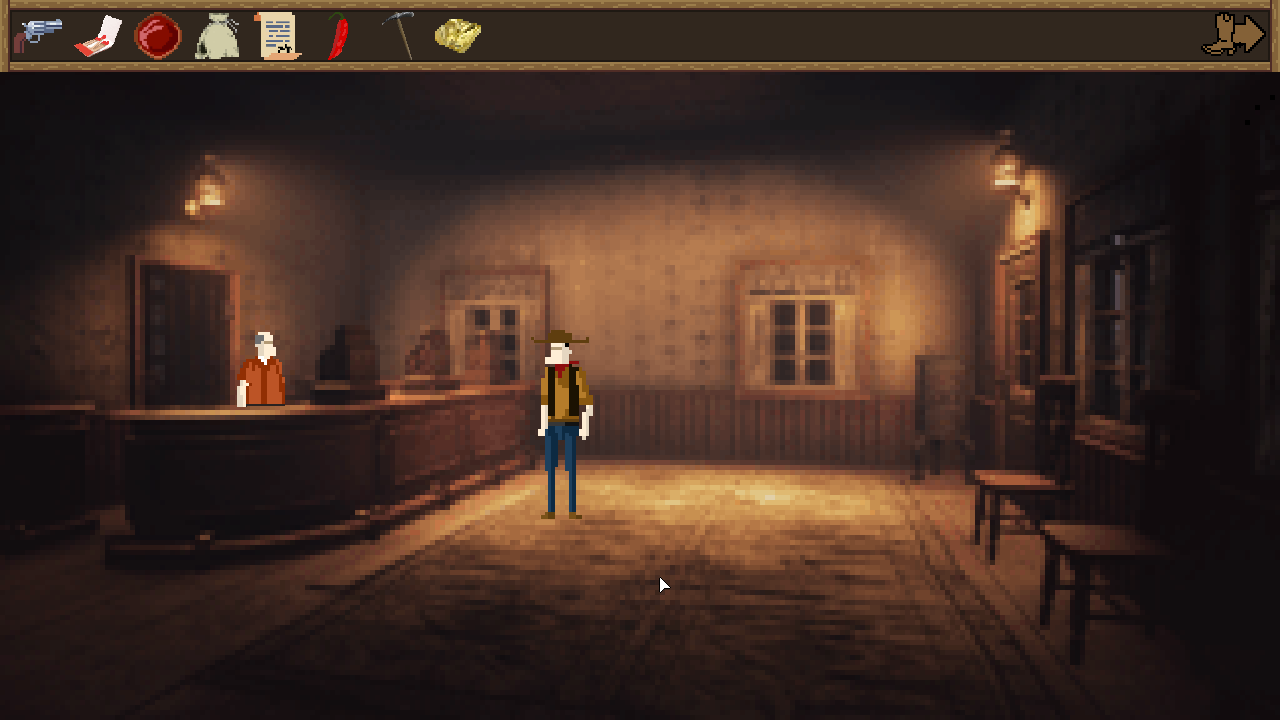 The slightly misnamed Coffin Valley (play the game to find out why) takes place in a photorealistically rendered old western town full of quirky characters that are all fully voiced. You play as a new arrival in town who wants to become the sherriff's deputy and has to prove to the sherrif that he's up to the task. The scenery and characters are augmented by quite a number of puzzles that aren't too taxing, but never stray into the realm of moon logic. In all, a solid entry.

Check out Coffin Valley, by WocGames 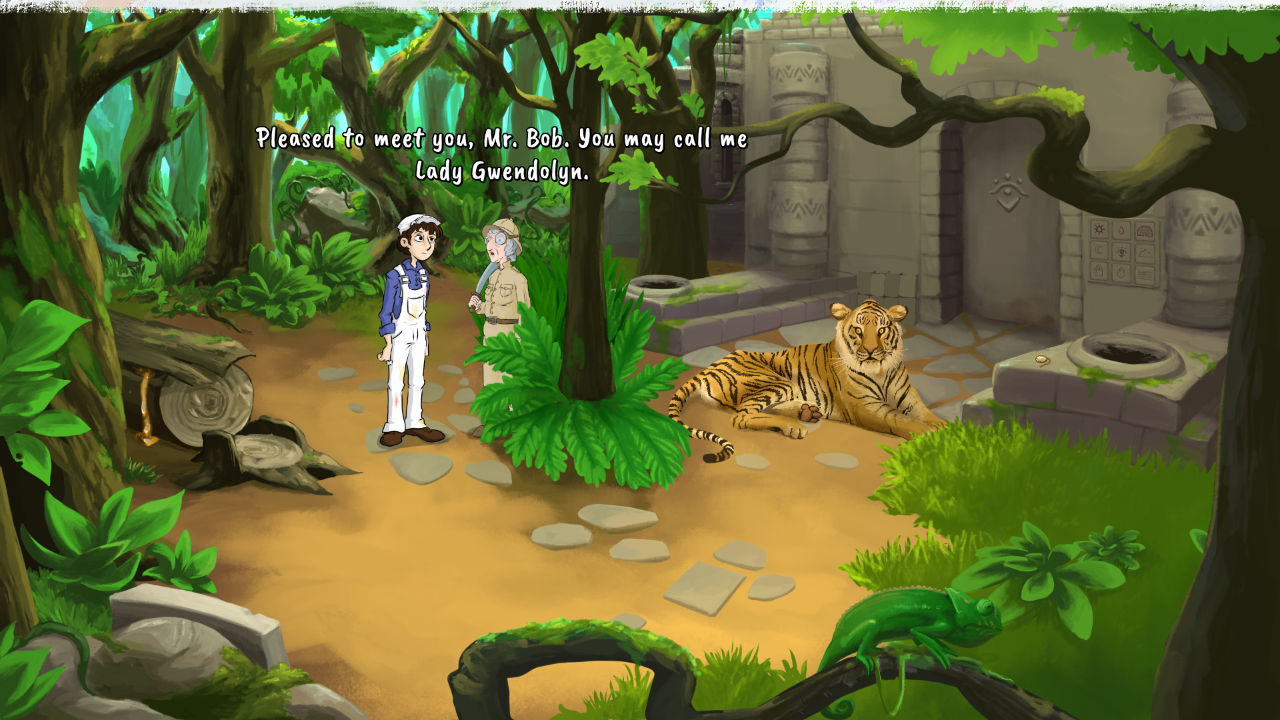 Last year, I had The Argonaut's previous entry, Me and the Robot on the list because it was gorgeously drawn, very well polished and contained a good amount of story and puzzles. The Argonauts have gone for a repeat performance with IMAGinE (the title with its strange capitalisation is a pun). Some of the puzzles are fiendishly difficult and the team have toned down the difficulty a bit on at least one puzzle that took me 2.5 hours to solve. It is a testament to good design that I liked the game so much that I gladly persevered. Gorgeous graphics, good story, and well designed puzzles. What's not to like?

Check out IMAGinE, by The Argonauts

Long in the Tooth 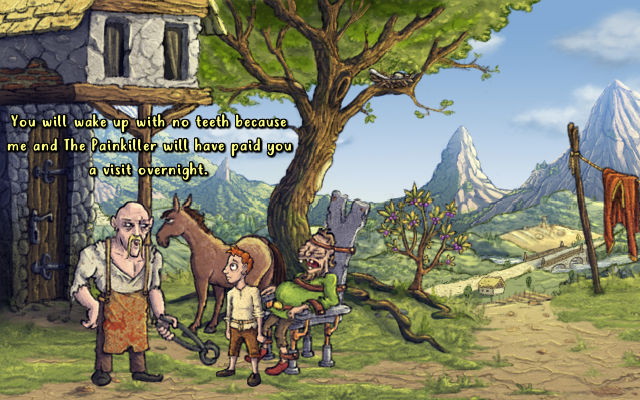 Long in the Tooth has some quality comedy writing, from the developer who is also working on Truth be Trolled. But what really made this short game stand out is the jawdropping quality of the graphics. Not just amazing backgrounds, but silky smooth animation that puts many a TV cartoon to shame. Honza wanted to put even more into the jam game, but there wasn't enough time. It's easy to see how that time was spent though and I'm quite frankly astonished at how much they did put in at this level of quality.

Check out Long in the Tooth, by Honza_27

Nebraska Smith and the Mask of Minkhamanna 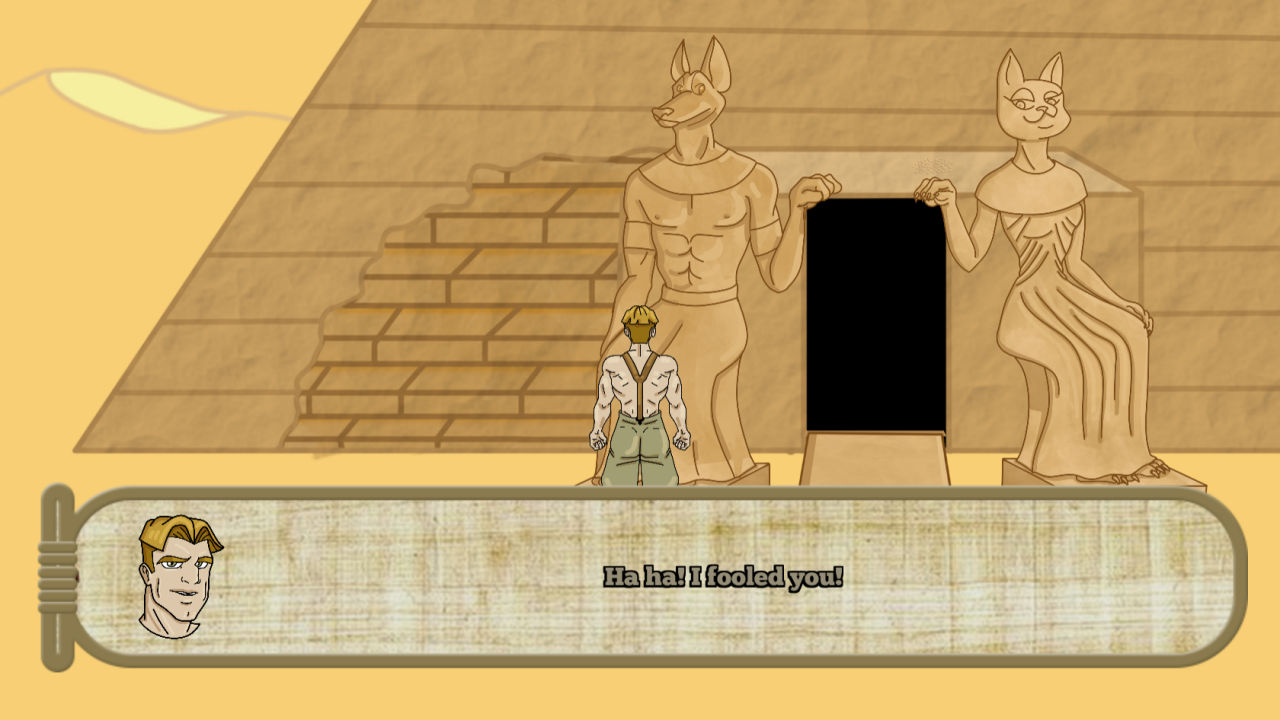 Nebraska Smith could be considered Indiana Jones's more muscular but also less intellectual cousin. Not just the name, but the logo and music are all very reminiscent of the famous archaeologist action hero. The puzzles are nicely inventive and the humour and character graphics are also top notch. Most of the background have had to be programmer art due to the intended backgrounds not being quite ready yet, but that doesn't detract from the fun of this game all that much.

Check out Nebraska Smith and the Mask of Minkhamanna, by GuGames 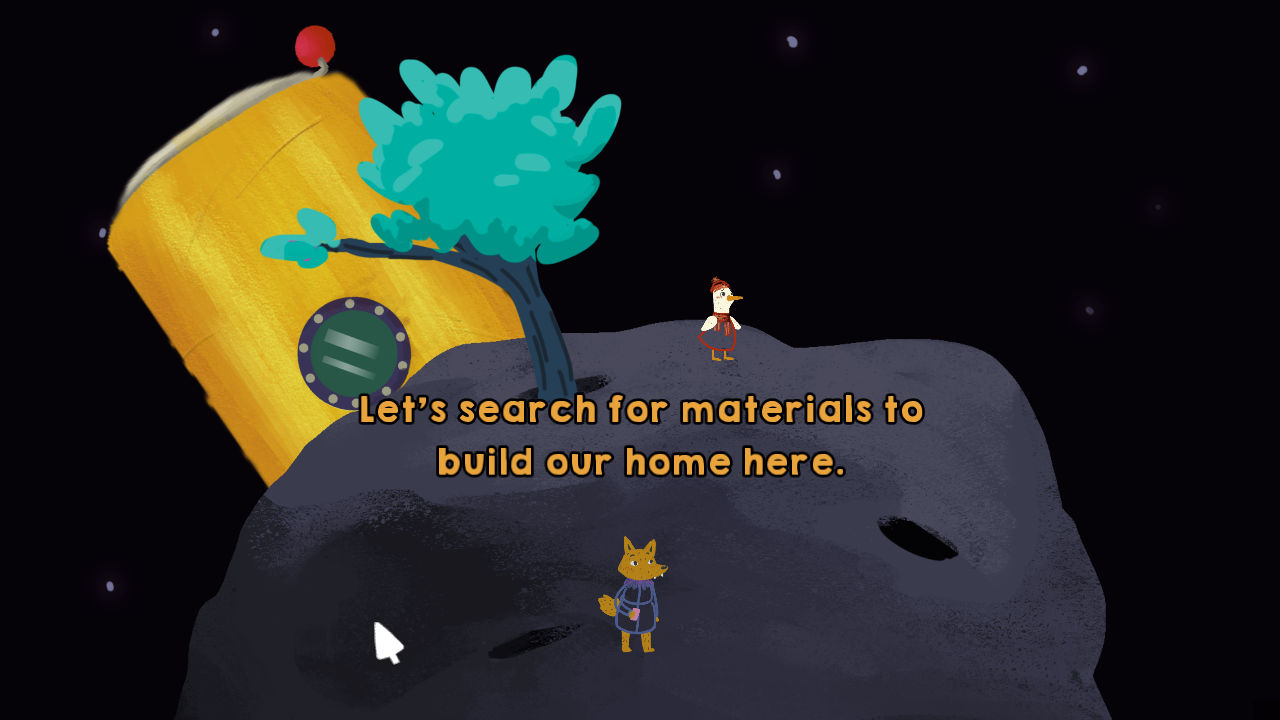 Pato is a duck who is secretly in love with a wolf, Lobo (the names are the Spanish words for "duck" and "wolf" respectively). She has to work up the courage to talk to him, but she can only build up her confidence by daydreaming. Or perhaps she could disguise herself instead to get Lobo to notice her. This game is a tad light on puzzles, but the characters are cute beyond belief and the story is simply adorable. You simply have to play this entry, even if it is just to hear the sounds Pato and Lobo make. 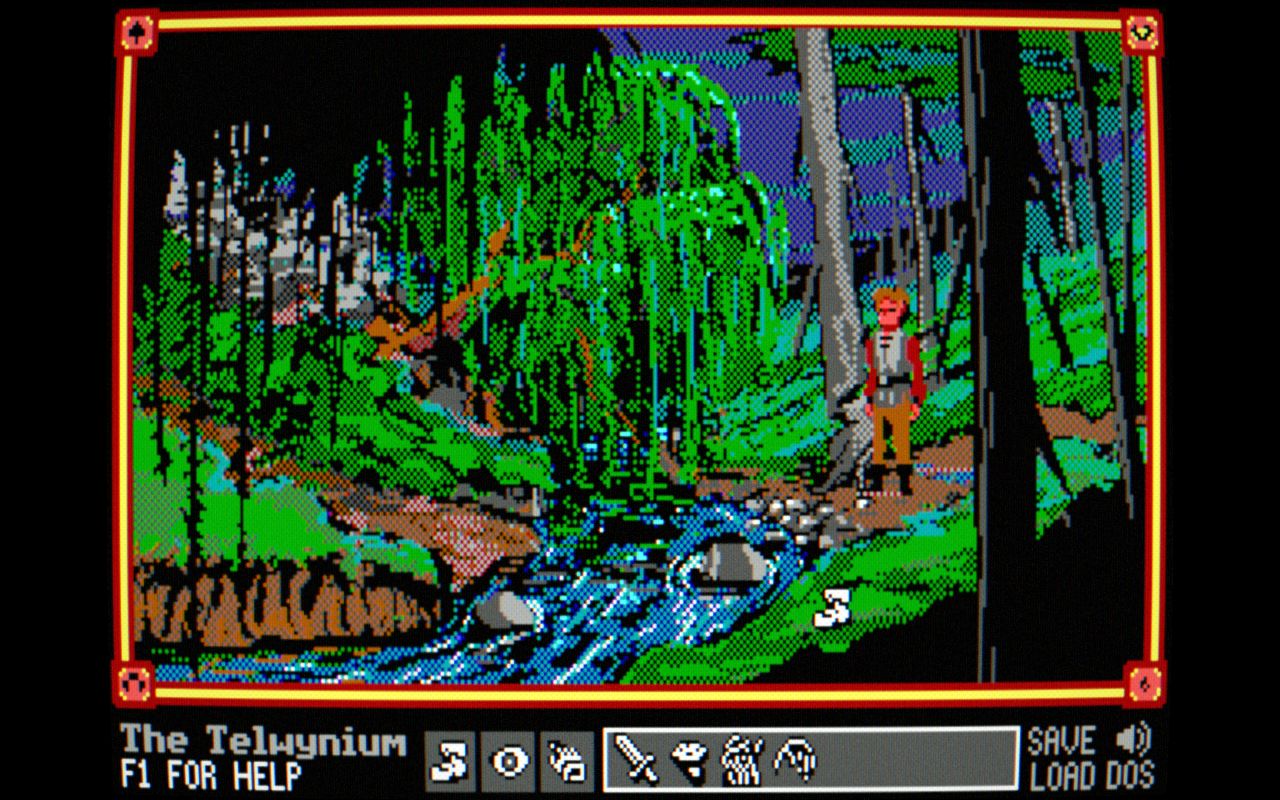 Being a big fan of the Sierra adventures of the late 1980s and early 1990s, there was no way I could not like a game created in that style. The Telwynium feels like a hybrid of SCI0 style graphics (enhanced by an effective CRT shader) with the SCI1 point and click interface, wrapped around a fantasy story of greater scale than one would usually expect in a jam game. It certainly feels like a part of a bigger and possibly expanding universe. It's the first Powerhoof game I've played that didn't have voice acting by Adrian Vaughan in it (I'm guessing for authenticity's sake), but even without voice acting, this is yet another highly polished production by Powerhoof.

A Weekend at Villa Apate 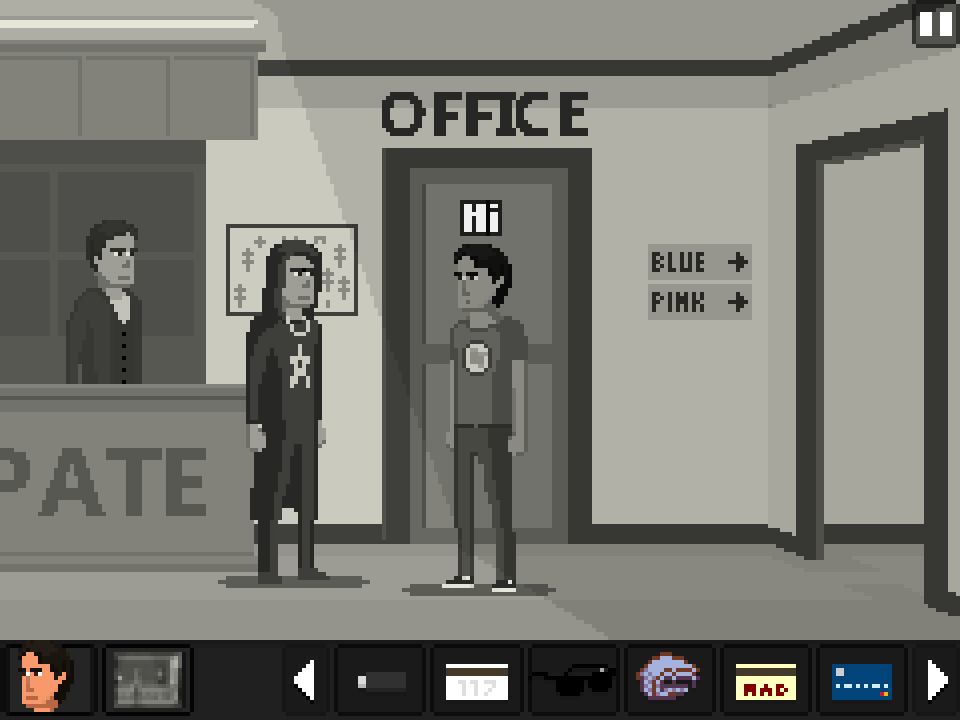 The king of expansive storylines has to be Marco Giorgini. His games are consistly the ones with the most content in the Adventure Jam for all four of the editions I've witnessed. Weekend at Villa Apate is no exception, even if it's not quite as huge as last year's Four Distant Daughters. By virtue of being a shorter (not short, just shorter) game, it is also obvious Marco was able to eliminate more bugs and polish the experience a bit more. The unexpected plot twists and the scale of the game, coupled with a cool musical score by Paco Diago (who is also the protagonist of the game, with developer Marco playing a supporting role) make Villa Apate rank among my absolute favourites.

Check out A Weekend at Villa Apate, by Marco Giorgini

Even with a mere 31 entries this year, there's still much more than I could cover here and I'd be remiss not to at least mention the following: