Adventure Jam 2020 has ended, and I've managed to play all playable games. I've tremendously enjoyed playing all the entries and have voted and left feedback and/or comments on every single one. There's been some great entries again and I think everybody can be proud of what they've done. Some of the games are very short and can be completed in 2 minutes, others are astonishingly huge and sprawling full-length games that could take hours to puzzle your way to the end without a walkthrough. Here, shamelessly catering to my own tastes in adventure gaming, are my own favourites, in alphabetical order:

Definitely check out those, as well as the many other entries. If you're an adventure game fan, you're certain to find something you like, even if your tastes are quite different from mine. And in case you're wondering, my own entry was Spy Quest 2 - Operation: BOGROLL. 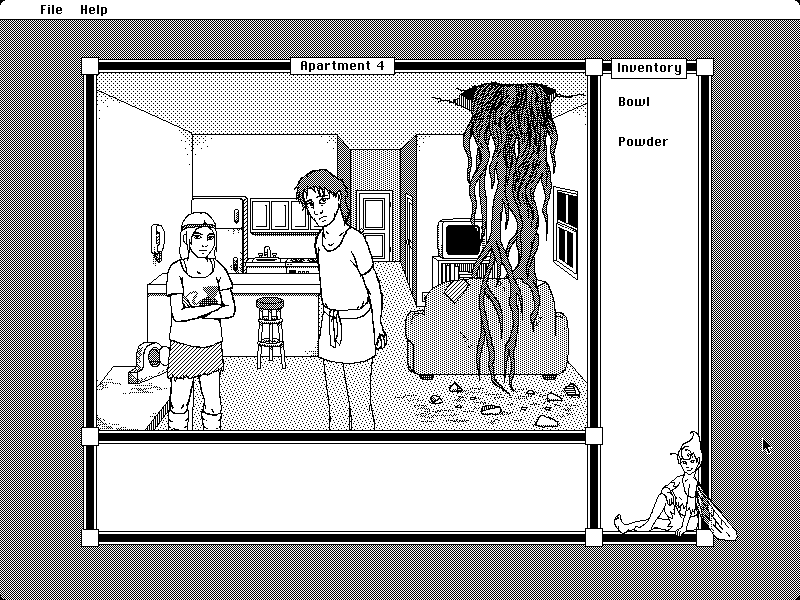 Akril15 did something quite different from her previous entries, forgoing detailed animations and colourful painted backgrounds in favour of monochrome line drawings with the occasional colourful detail surrounded by a classic Macintosh interface. Don't dismiss this entry based on that, as the art style is very much a deliberate choice and works well with the rich story. This is a very big game, which will take quite a while to get through. I wouldn't want to spoil it for anyone who hasn't played it yet, but I will say that the game rewards you for being observant. 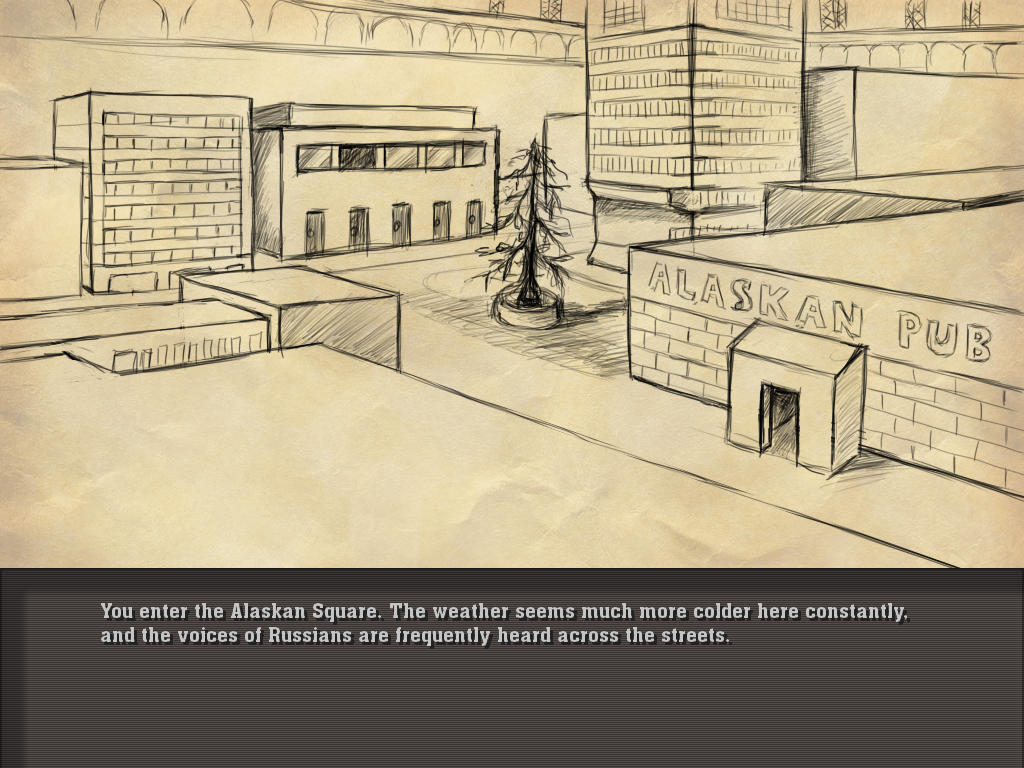 This demo of a full game, Mr. Bitmap's first entry in the Adventure Jam, is ambitious to say the least. Surprisingly, he's managed to pull it off with aplomb. Although the interface can use some polish (and I'm sure it will be much improved by the time the full game is released without the time pressure of the jam), the world and the story are already quite expansive and the art that looks like pencil drawings with greyscale watercolour paint gives a very nice feel to the game. 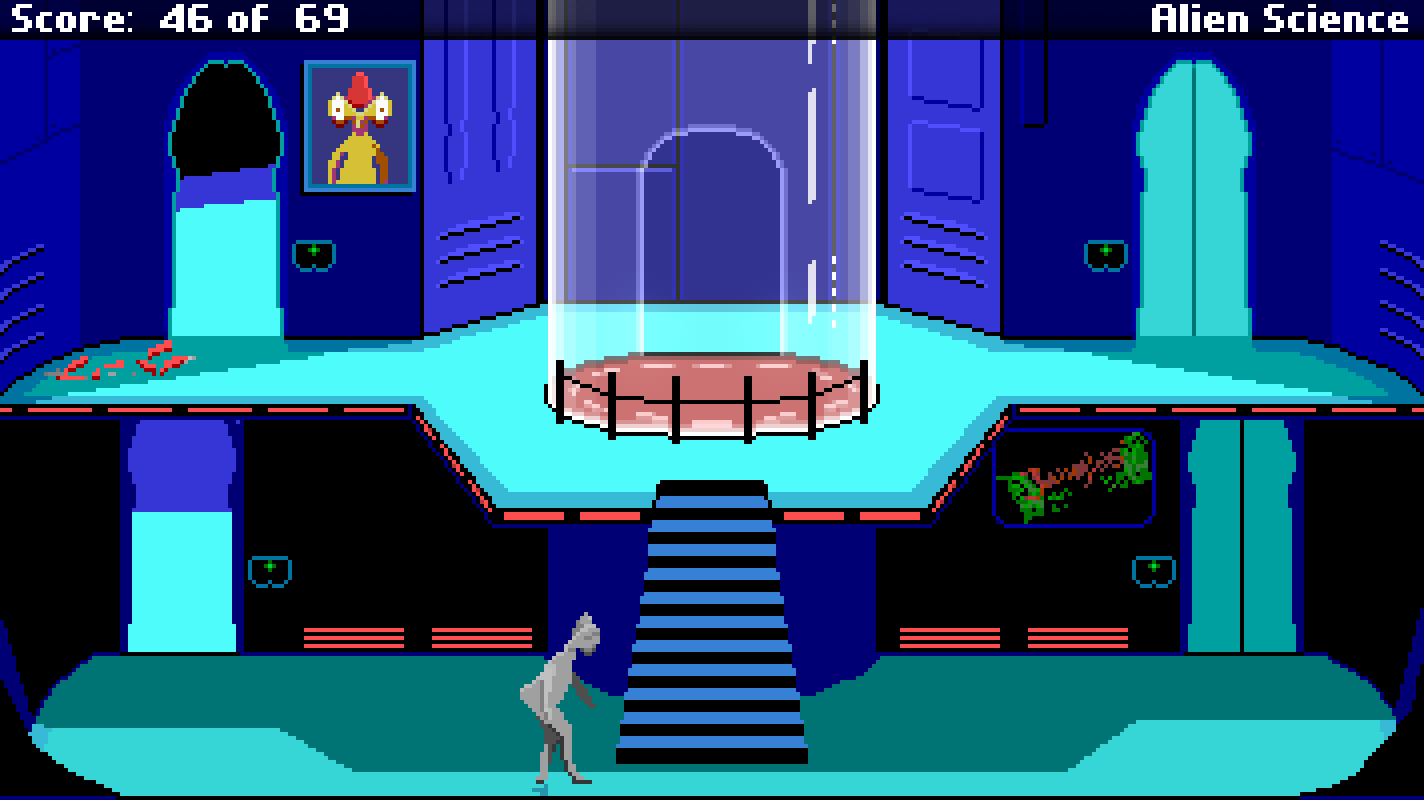 Check out Alien Science, by icefallgames 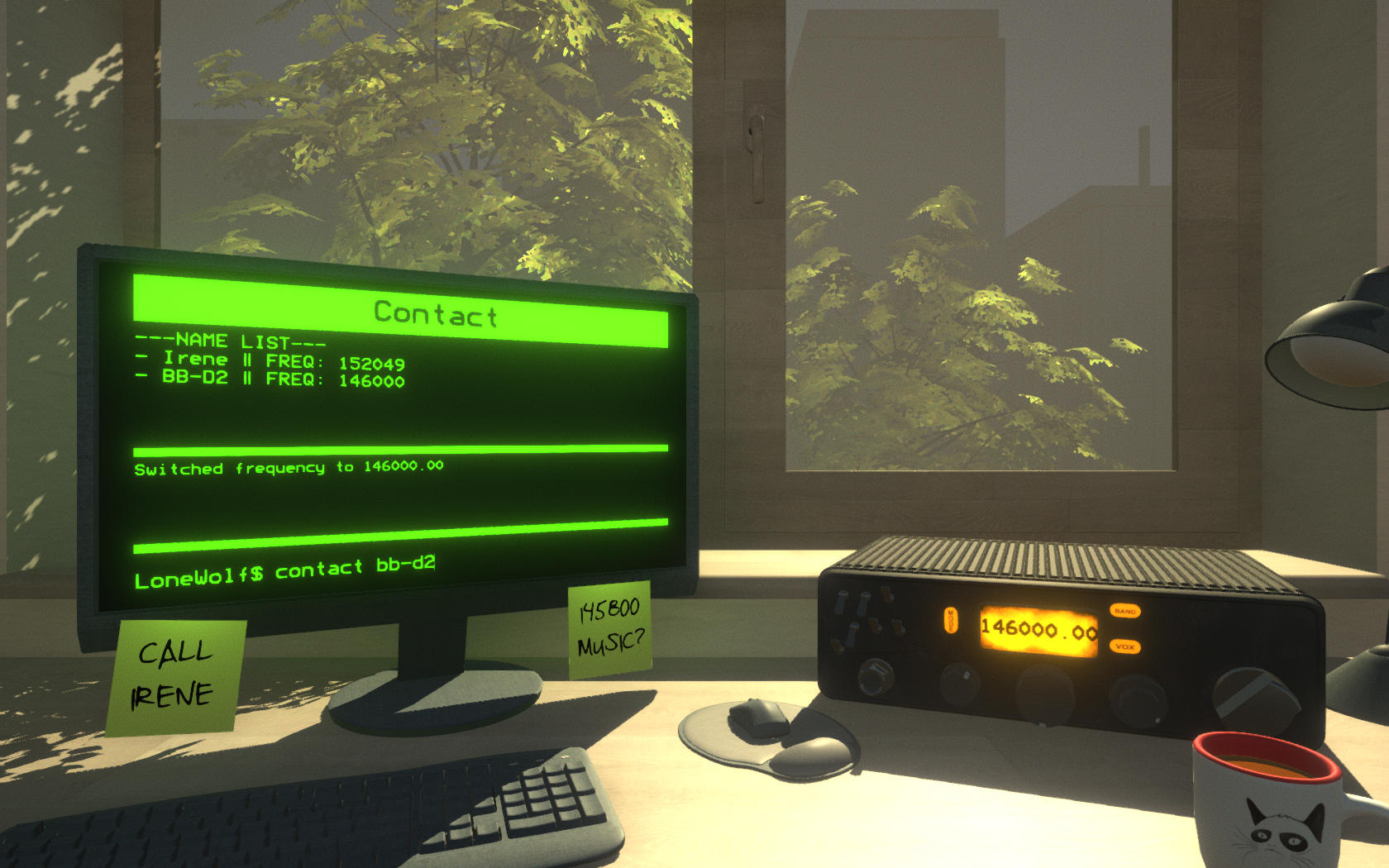 This game is basically a text adventure and quite a long one. The story is essentially entirely linear, there is only a very limited number of actions you can take at any time and it would even get a bit repetitive. This meant that it took a while to get into the game, but when I did, I found the story quite compelling and this game manages to sail into my list of favourites by virtue of its narrative.

Check out Are you there?, by vicimus

Cavern of the Evil Wizard 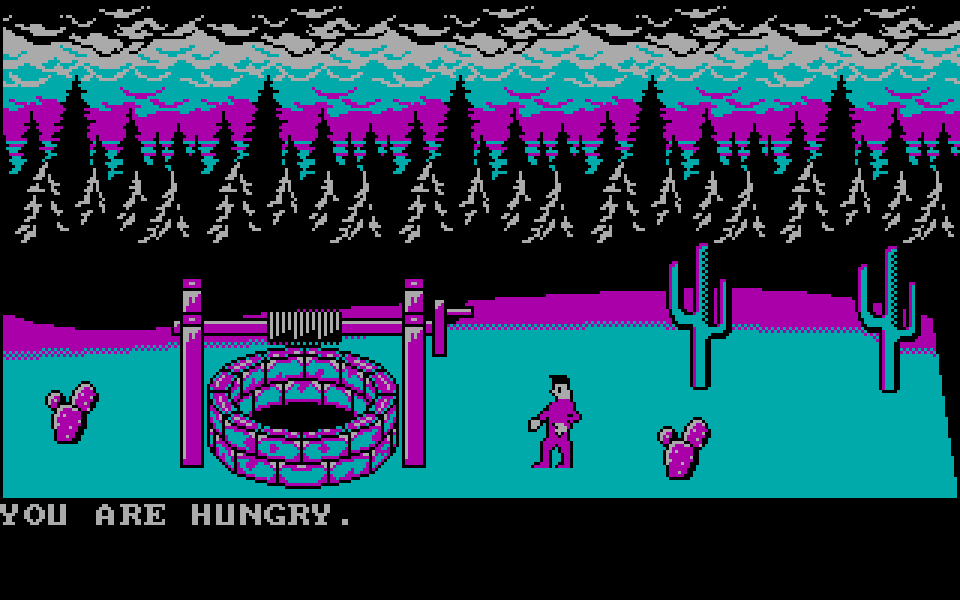 If you've ever seen the 1988 Tom Hanks movie "BIG" you might remember the scenes in which Josh played a 4-colour CGA adventure game on his PC, showing only the final screen in the game. The developer definitely remembered and sought to make the game as it might have been, culminating in a recreation of the screen from the movie. The game is very short and limited, but that actually goes really well with how text adventures with graphics might have been in the early 1980s. It's short, quirky, and fun.

Check out Cavern of the Evil Wizard, by MontieMongoose

Bruno is a donkey who has to find help for his master, Sir Bleddyn, who has been bitten by a venomous serpent. All the action takes place on a single scrolling map drawn in the style one might see in a children's book. The adventure is pretty short, but the story and graphics are funny and cute, with nice characters and top notch voice acting.

Check out Chronicles of Bruno, by simonreid

The Creator Is Mean 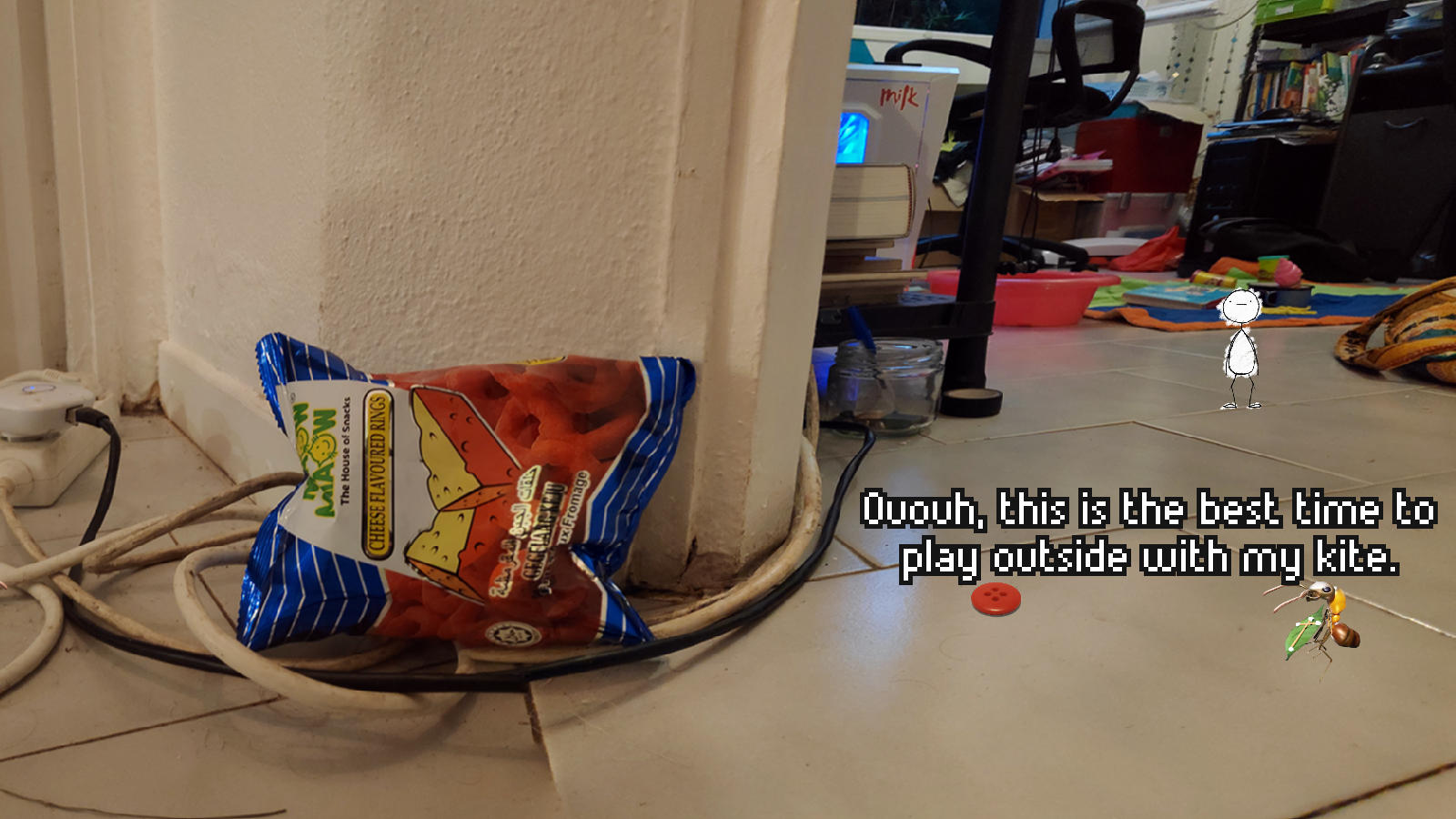 This game is thoroughly French in its story and puzzles. The French seem to have a penchant for absurd settings and puzzles (look at the Coktel Vision games for some great examples). In The Creator is Mean, you play as a drawing which gains sentience because his creator does a mean thing to him and you are out to get justice in a weird, weird world. The characters are fun and quirky and the story is a pretty good length.

Check out The Creator is Mean, by Loïc Manglou 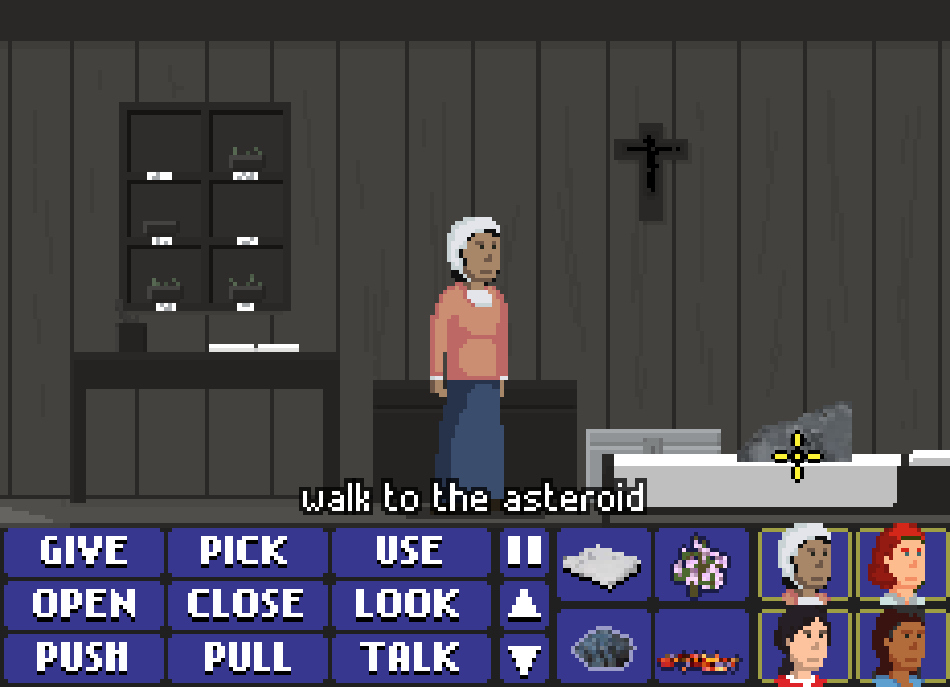 My friend Marco has made some of my favourite entries in previous years and he's done it again. If last year's The Darkest Tree was big, this game is positively gigantic, which is all the more amazing given the timeframe of the jam. With four playable characters in four different time periods, it took me several hours to see the end of this game and I thoroughly enjoyed every minute of it. I also appreciate the details like the habits the monks are wearing being based on historical fact, or the slightly transparent hologram having no shadow. 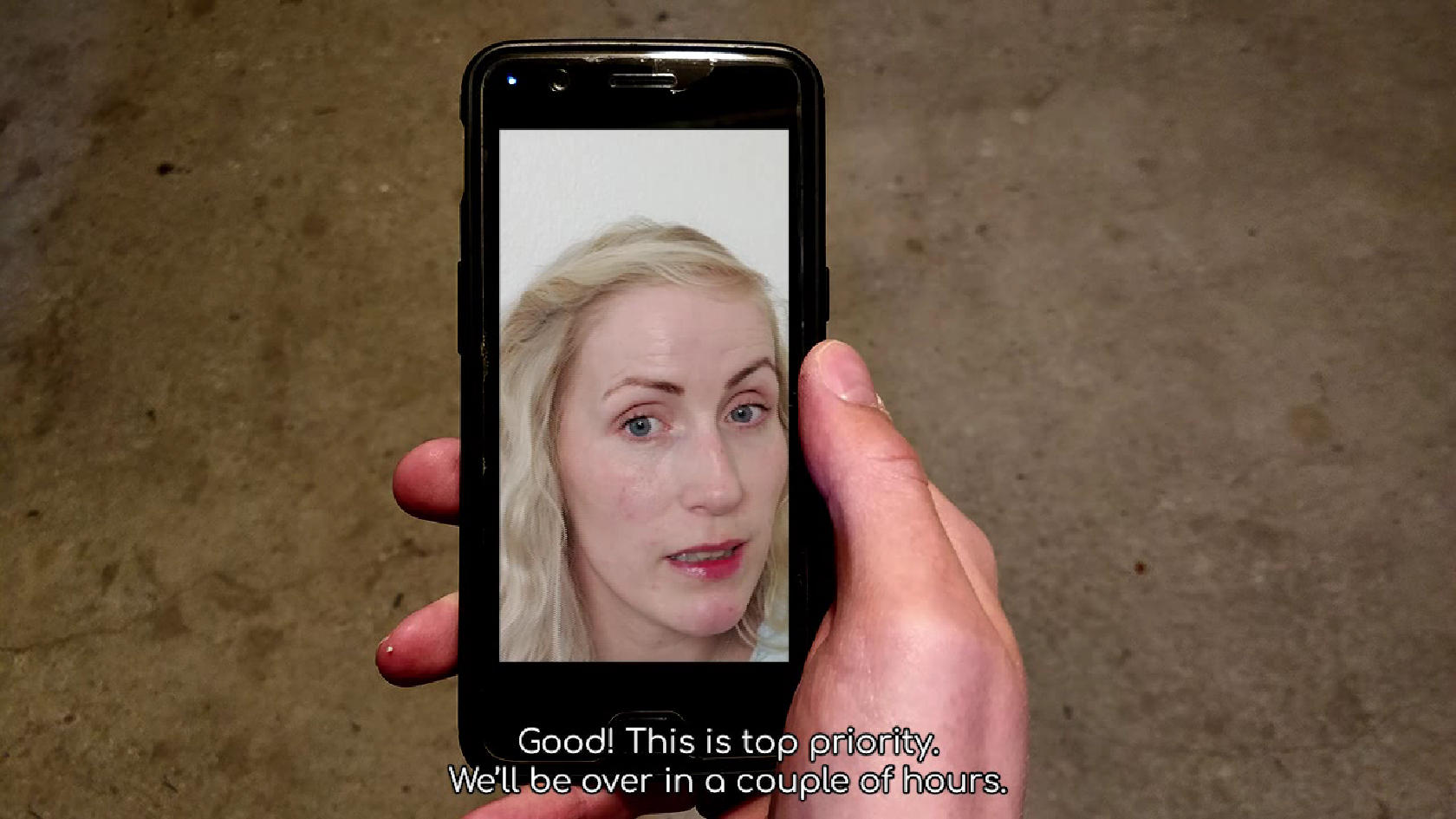 The Space Quest Historian and co-conspirator TorpedoBear went for the pixellated look last year with Brexit-Man, this time they went in the opposite direction with the entire game being made with full motion video, complete with cheesy 1990's FMV game acting and at least a metric fucktonne of over the top jokes, a hilariously absurd story, and even a smattering of puzzles.

Check out Long Distance Coughing, by The Adventure Think Tank

Me and the Robot 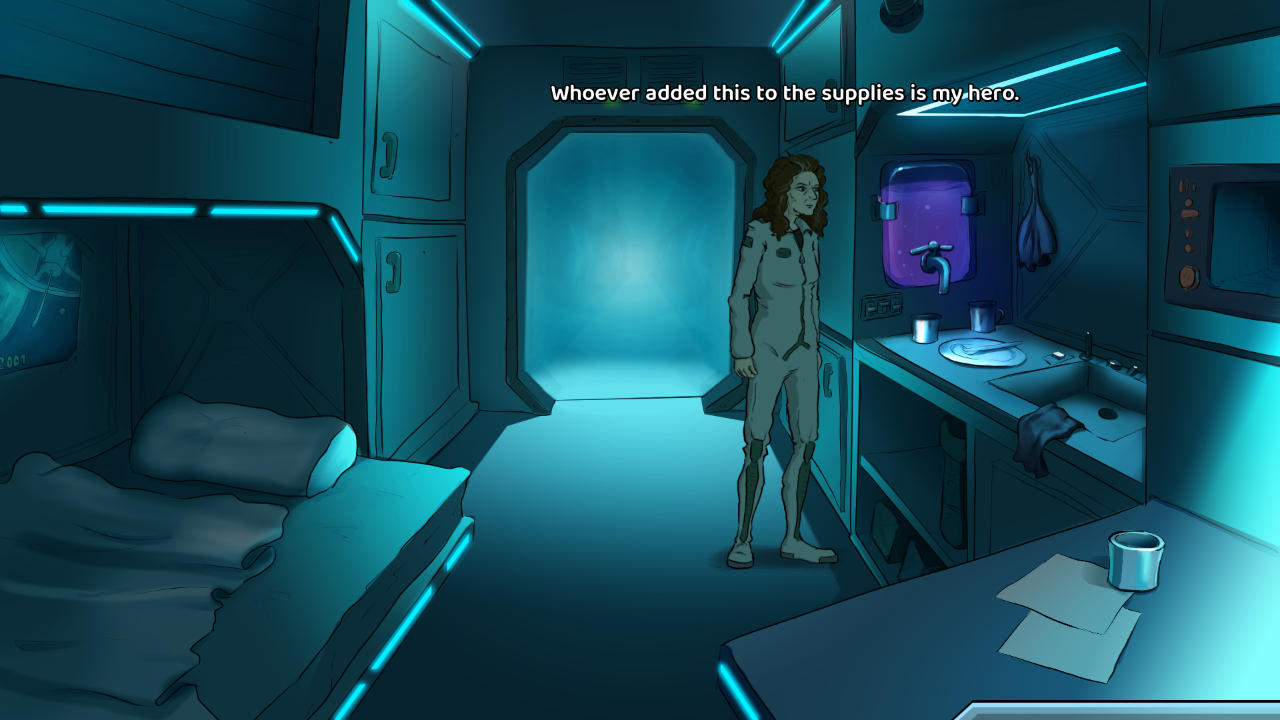 In my opinion, this is the single most polished entry in the entire jam. They had a full team working on it, and it shows. The graphics are gorgeously drawn and well-animated, and there is a good amount of puzzles and a full length, well-written story with a handful of accessible locations. At this level of quality, I would not have been surprised if this had been a commercial game. The developers are even adding voice acting in a post-jam update. I was quite simply gobsmacked by this game.

Check out Me and the Robot, by The Argonauts

Name of the Hose 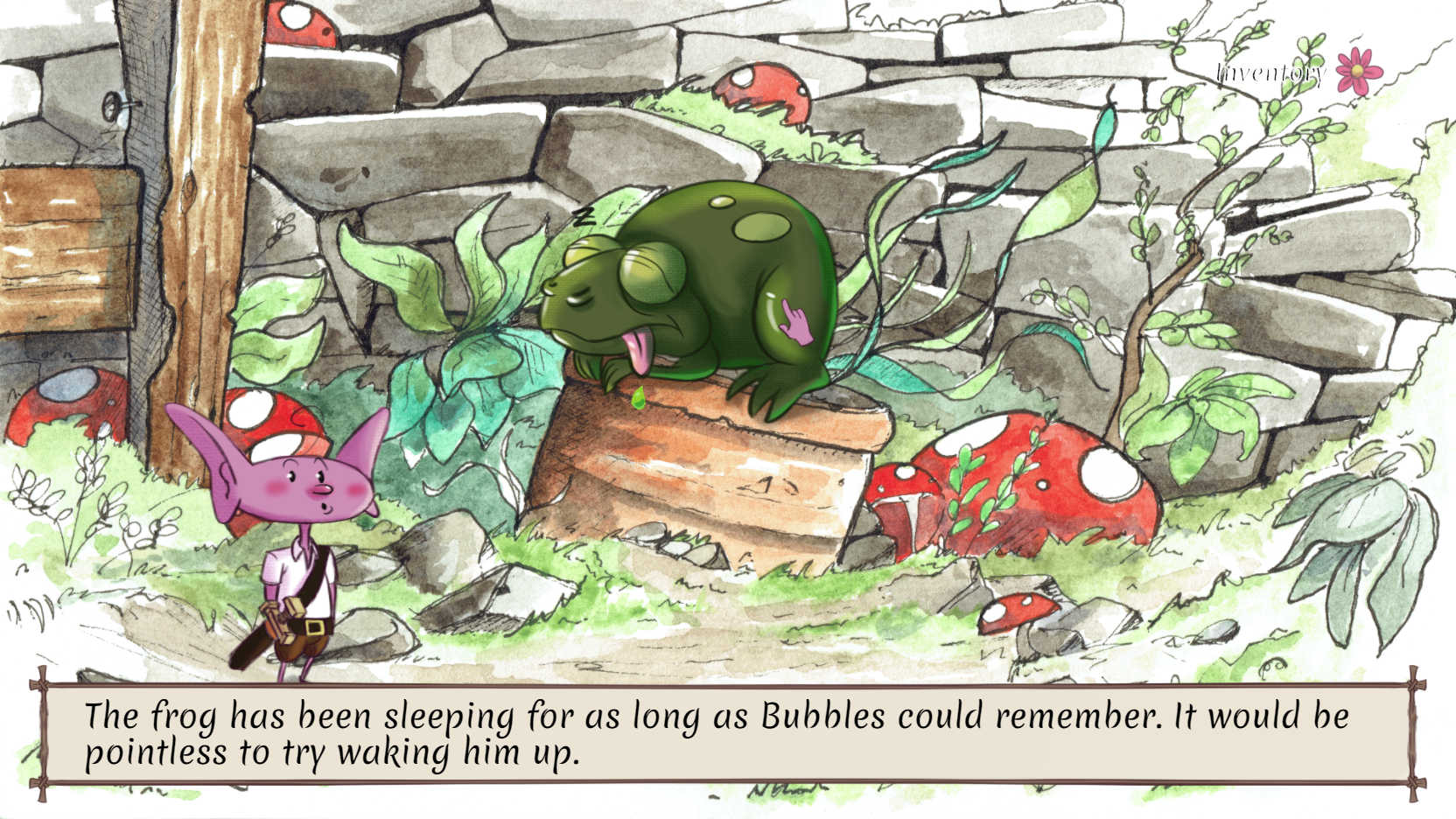 With high quality illustrations, that would not look out of place in a story book for kids and a story and characters to match, this is one of the cutest games in the jam. The backgrounds drawn by Matt Frith and characters by Joel Mayer go wonderfully well together. Playing as a mischievous pixie, you must find your way across the sea to defeat the monster threatening the village. I don't want to spoil the story for anybody who hasn't played it yet, but when you're looking for a quick and wholesome story, I will wholeheartedly recommend Name of the Hose.

Check out The Name of the Hose, by Joel Mayer

Tales from the Road 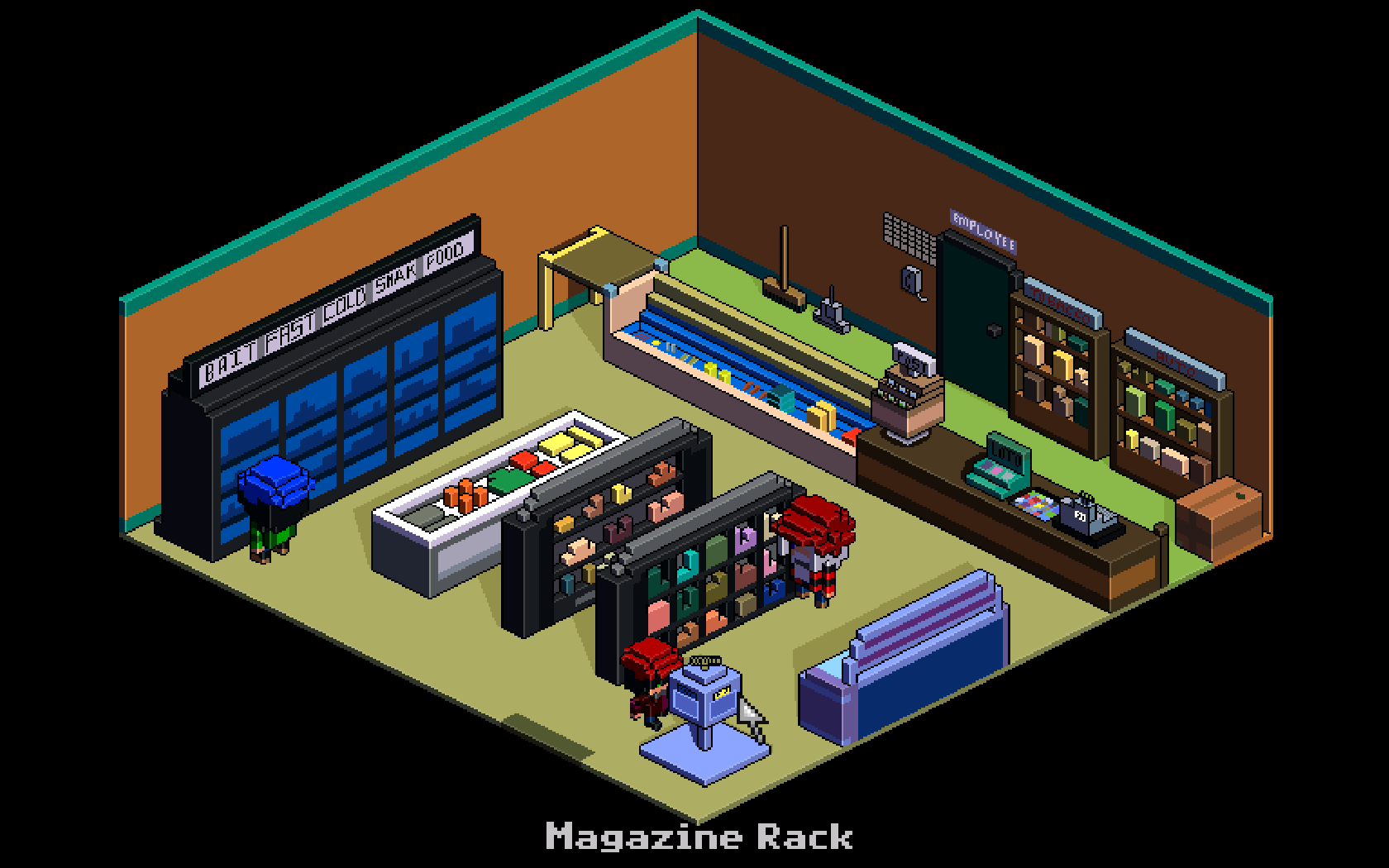 Durinde's game gives us the strange setting of a supernatural petrol station and throws in some Quantum Leap style "putting things right that once went wrong" in a short feel-good story. There's not a whole lot of content in there, but it's sweet and short and the isometric pixelart gives it a unique feel.

Check out Tales from the Road, by Durinde 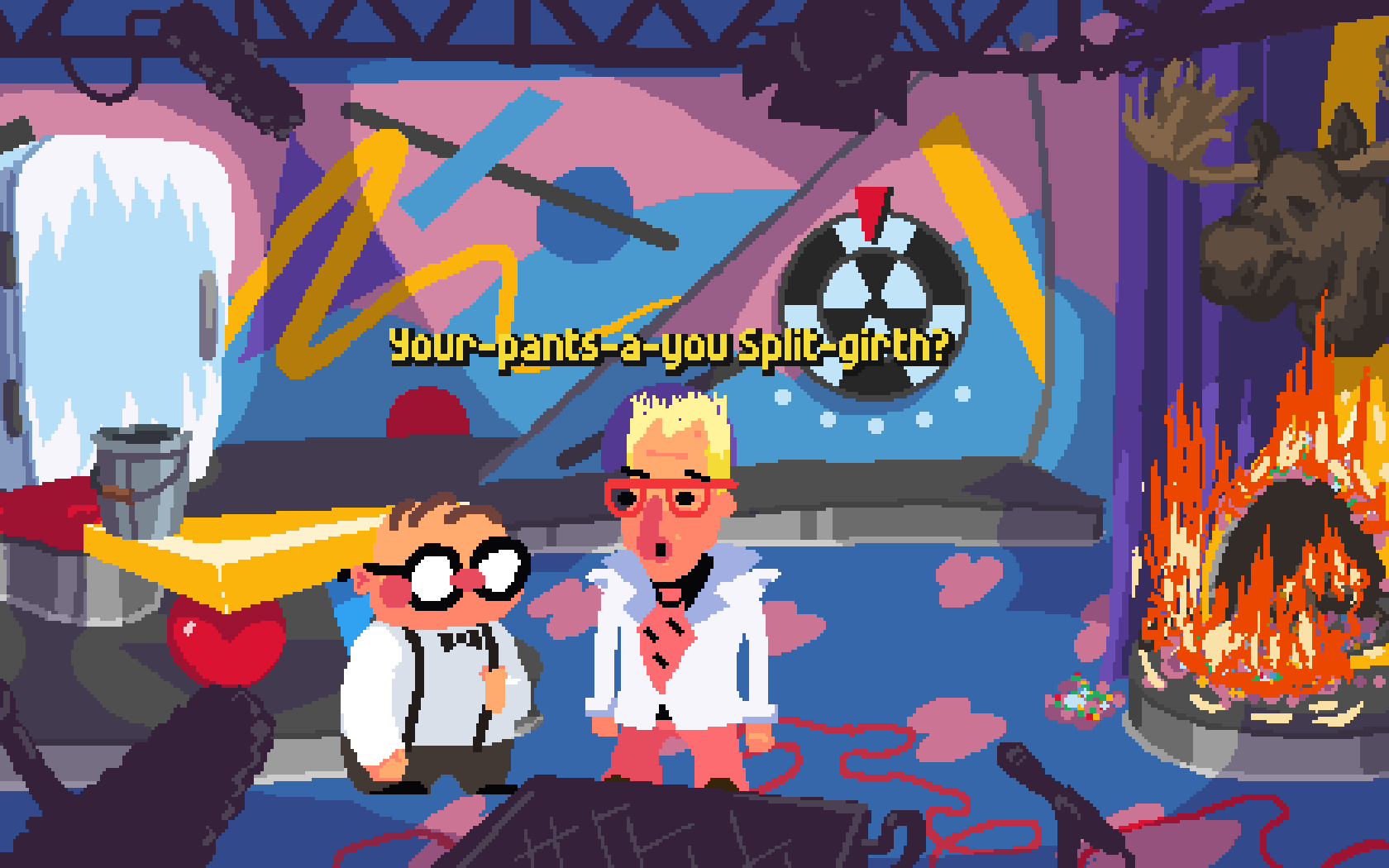 The Adventure Jam would not be complete without an entry from Powerhoof. They limited themselves to just one location this year (also because their developer came straight out of Ludum Dare - check out their entry Dunder from that, too), but managed to pack a lot of weird and wacky puzzles and humour into that. From the return of Dr. Kochbaum, the picky German dance group NIHILISTOBAHN to the wonderfully clueless divorce lawyer Bartholomew Pittsworth (whose name you keep deliberately mangling) and with the colourful graphics and great voice acting, there is nothing I didn't like about this game.

Check out You're Watching ICEBOX, by Powerhoof

The ones above are not the only cool entries.. Other ones that I'd like to at least mention are: