Even though I'm a big adventure game lover, I hadn't known of AdvJam before. The jam is about creating an adventure game in a mere 14 days. This year, it ran from 4 to 18 May and I learned about it in time and was able to create an entry for it. "Spy Quest 1 - Mission: SPECTRUM" is my tribute to the older text parser adventure games as made in the 1980s by Sierra. Not actual Sierra AGI, but with the same kind of blocky low-res style of artwork in all the 16 glorious EGA colours. Party like it's 1988! 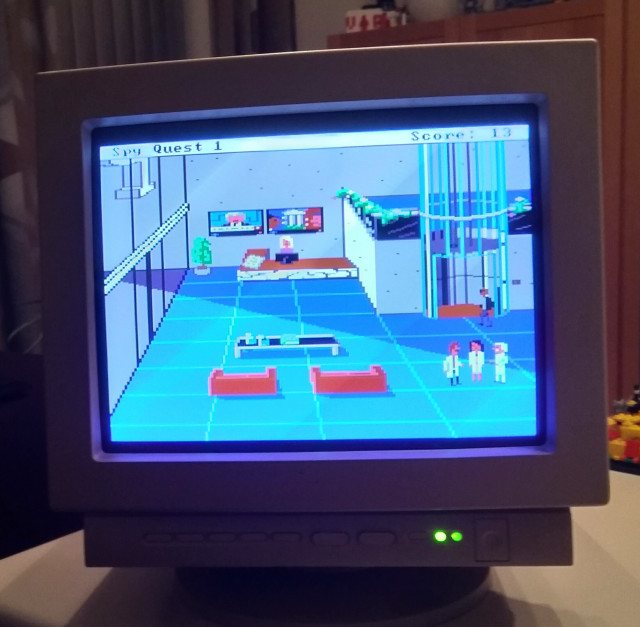 In the game, you play as Agent N of the HCA (Highly Clandestine Agency) and are on a mission to infiltrate Spectrum Enterprises' corporate HQ to find out what nefarious scheme they are about to unleash on an unsuspecting world. Or have they perhaps already done so? Walk around the locations of the game world using the cursor keys and type commands like "look painting" to make the character perform the actions you want him to. 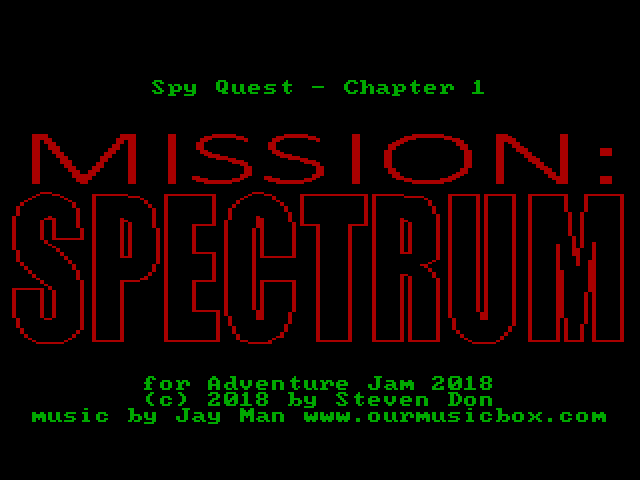 When I started out making this game, I figured that, given the tight time constraints of AdvJam2018, making graphics in 16 colour low res (Sierra's AGI graphics were effectively 160x168 pixels, horizontally doubled to 320x168 pixels) would be a time saver. Now, I'm not so sure.

When a character's body is 3 pixels wide, how are you going to make it seem like they're wearing any sort of interesting clothes or give them any personality? The lack of colours also makes it far more difficult to create aesthetically pleasing or visually interesting backgrounds. There are little or no shading options and many colours (orange? dark brown?) just don't exist in the EGA palette, nor do you have enough resolution to make anything detailed. Having the "full" width of 320 pixels and/or even as little as 64 colours would make things so much easier. 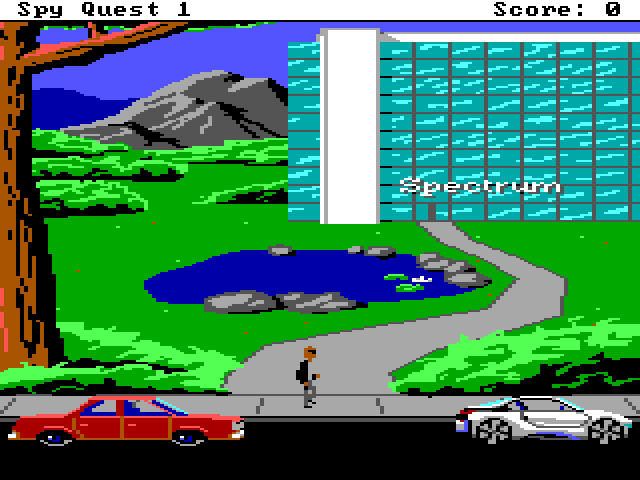 And that is without even mentioning the lack of sprite scaling AGI has leading making it very difficult to keep things from getting overly disproportionate with the scene perspective, especially in indoor locations. Working on AGI style graphics has left me with a renewed respect for Sierra's background artists who managed to make some very impressive backgrounds given the limited resources available to them.

One of the most pronounced differences in game design between Sierra and LucasArts was that Sierra game designers seemed to take a near perverse delight in killing the player over the most trivial things, often as part of the humour, sometimes through arcade sequences, or even in Gold Rush through random chance. This meant: save early, save often.

Even if you didn't always die, there were quite a few 'dead man walking' situations (though, to be fair, there were a few deaths or DMWs in LucasArts adventures, too). I wasn't sure whether to avoid deaths and DMWs in my game altogether, or to keep them in to have that authentic Sierra feel. It was an easy decision to try to make sure that a DMW is not possible, but for deaths it wasn't quite so clear. So instead, I've chosen to leave it up to the player:

That dialog box pops up at the start of the game and you, as the player, can decide whether you want the genuine retro experience with the chance of dying (or otherwise losing) or whether you just want to make your way through the game to see how the story turns out. To still give you some incentive to do the right thing, points will be deducted from the score in most cases when an otherwise lethal event would occur. But at least you can just continue playing.

The 14-day time constraint is brutal. Especially as I had first started writing this engine 18 years ago, with the intention of making adventure games, but hadn't worked on it for at least 15 years and it wasn't up to the task without quite a lot of fixes and improvements. So I ended up both doing the game and bringing the engine up to snuff in those two weeks. I'm quite proud of having created the game in that short time and putting in more detail and polish than I would imagine is typical of a one-person project created under such hectic conditions. And now, I need to get my heart rate down to triple digits or, in adventure game speak: initiate emergency shutdown. 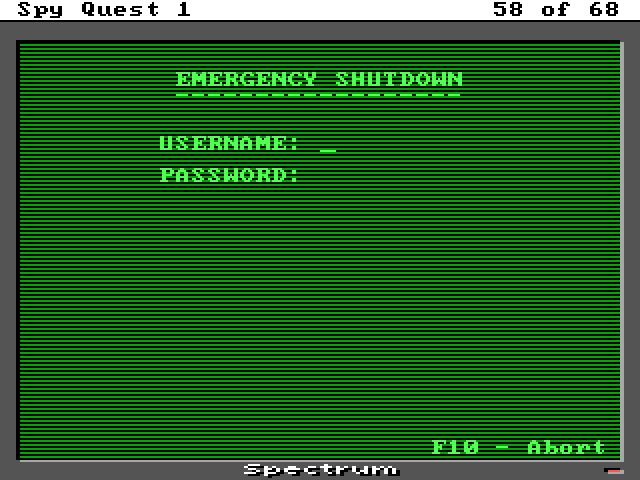 Go ahead and check out Spy Quest 1 - Mission: SPECTRUM on this site, or the Game Jolt page for it. And if you're an adventure fan, be sure to try the other entries, too. It's truly amazing what people managed to produce in such a short time span!

I'm mainly interested in AGI background art. So I want to ask if you made all these backgrounds using a mouse. If yes, what procedure did you follow? For instance, did you first draw the outlines on paper and scan it later or maybe use a graphic tablet/pen and create a layer with a raw sketch of the outlines and later on you use mouse and draw the details?

By the way, which drawing application do you use?

In my case, I've tried many times to draw something with a mouse and after a few clicks the only I got was to get angry and frustrated and search for the tablet. Honestly I can't understand how people believe that using a mouse feels "natural"? No way, it feels like drawing with a brick!

I would appreciate any help of any suggestion/links that teach you how to create backgrounds of that style using a mouse.

The initial sketch I did was with ballpoint pen on a paper notepad. I didn't scan any of those, but did keep them handy for reference while I was doing the actual bitmaps. And yes, I used the mouse for that, as I don't have any other input method. For limited-colour line art, this isn't so bad, as I want to have rather precise placement, down to the pixel, which is more difficult to do with a tablet. To each his own, though. Use what you think works best for you.

The 16-colour EGA backgrounds in early SCI titles (Space Quest 3, King's Quest 4, Larry 2 & 3, Codename: ICEMAN, Police Quest 2) aren't much different, just with a better horizontal resolution. The more realistic ones, like the 256-colour VGA in later SCI titles, I wouldn't want to draw with a mouse. There, I'd probably do the whole thing as a water colour painting, then scan it later. Maybe I'll try doing some on my Surface Pro with its stylus, if I can find an art package that works the way I want it to.

The background for this game were made in Corel Paintshop Pro 2018. I created half-width double-height versions where the top half was used only to place the vanishing point, so I could draw perspective correct lines. When the images were done, I cropped off the top half and doubled the images horizontally to get the AGI look.