The 1980s and first half of the 1990s were probably the golden age of the adventure game. Heavyweights Sierra and LucasArts created many inventory-based graphic adventures such as King's Quest, Space Quest, Monkey Island and Day of the Tentacle, to name but a few. As the 21st century approached, interest in these games waned while production costs skyrocketed. Sierra eventually closed down entirely (though there are signs of it starting back up again, it remains to be seen in what form that might be) and LucasArts focused on their Star Wars franchise.

Although there have been adventures created in the meantime, such as The Longest Journey (and its sequel Dreamfall), Vampyre Story, Book of Unwritten Tales and TellTale Games' episodic continuations of the Monkey Island and Sam and Max series, as well as many fan-produced efforts, there wasn't enough to keep adventure game fans happy. And then Kickstarter and Tim Schafer came along. Schafer, of LucasArts fame, decided he wanted to do an old style point and click adventure and set up a Kickstarter campaign to gauge the interest. Adventure game fans responded overwhelmingly by making the campaign one of the fastest and best-funded ones ever.

If they can do it, surely we can, too!

The success of Double Fine Adventure stimulated other adventure game development veterans to start their own campaigns. Not all of these projects ended up being funded, but quite a few have. On the whole, being less dependent on publishiers and relying on crowdfunding has led to a resurgence of the point-and-click adventure game genre. Here's my pick of adventure game Kickstarter projects that I've backed, spending much more than I would have spent on these games back in the day. Why the extra investment? For the fun of being involved, for getting to follow the process, for some of the awesome rewards the developers come up with, and most of all: to ensure that these games get made. 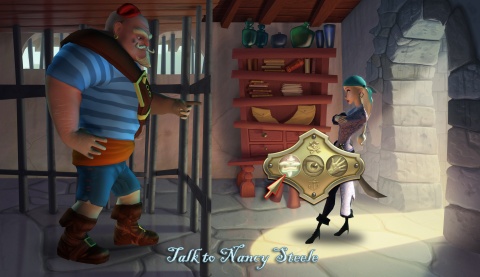 One of the projects Bill Tiller is involved with. Intended to be a short and sweet adventure game in the vein of Monkey Island with about a dozen locations, 2-4 hours of gameplay and a healthy dose of humour.

The story revolves around a pirate who, while very strong (look at him in the screenshot, he's built like a brick outhouse!), is hardly what you'd call the brightest bulb in the bunch. He's been convinced that to prove his worth in order to become captain, he much show himself to be a true swashbuckler, by wooing the ladies. It seems like a perfect setup for humourous point-and-clicky goodness.

Duke Grabowski probably has the least ambitious scope of the projects on my list. That's good, as it means the developers are less likely to overreach and more likely to achieve their stated goals. 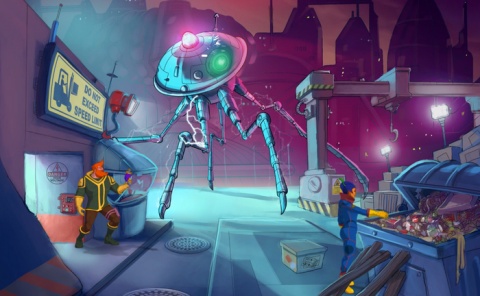 The first game featuring Kaptain Brawe, Kaptain Brawe: A Brawe New World was published in 2010 and prior to this Kickstarter campaign, I had not heard of it. Cateia is now looking to make a sequel, with hand-drawn scenery, full voice-overs and collaborating with writer/designer Steve Ince (who worked on Broken Sword) and artist Bill Tiller (yep, he of Curse of Monkey Island fame).

Kaptain Brawe 2: A Space Travesty seems like it could offer a great story with sci-fi/fantasy setting and the all-important tongue-in-cheek humour. Read the short story Steve Ince wrote and you'll see what I mean. 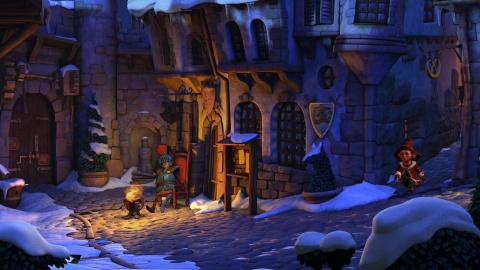 The Book of Unwritten Tales 2

Here's a bit of an unusual thing. KING Art did not do this Kickstarter campaign to secure funding to be able to make the game... they were going to make it anyway. Instead, they decided to use crowdfunding to make it possible to improve the game with new graphics techniques, side quests and orchestral music as well as documenting development through a video blog.

The first Book of Unwritten Tales was definitely among the best adventure games I've played recently and I liked its prequel Critter Chronicles even better. The games manage to make intriguing puzzles, with a sense of urgency, while also keeping the LucasArts tradition of it not being possible to die in the game or end up as "dead man walking" (a situation where the player cannot continue, because of a missed opportunity or mistake made earlier).

KING Art have certainly proved they're capable of making excellent adventure games and I have no doubt that Book of Unwritten Tales 2 will be just as good. 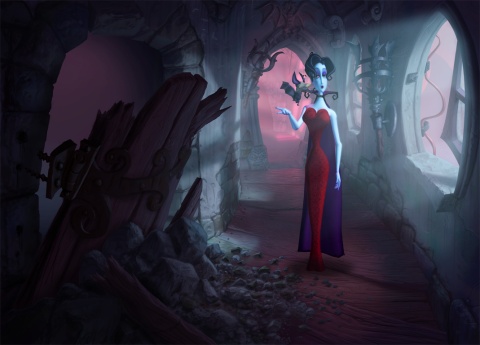 A Vampyre Story: Year One

I found the original Vampyre Story on DotEmu and it took me a while to get around to playing it. I was pleasantly surprised. The brainchild of Bill Tiller (there he is again), is an excellent adventure game and it is much larger than it initially seems.

The part where Mona De Lafitte escapes Baron Shrowdy von Kiefer's castle in itself is the size of a pretty decent adventure game already, but that is only about half the game. It is sad that this game did not get the recognition it deserved. That is probably also why the Kickstarter campaign failed to meet the funding goal. 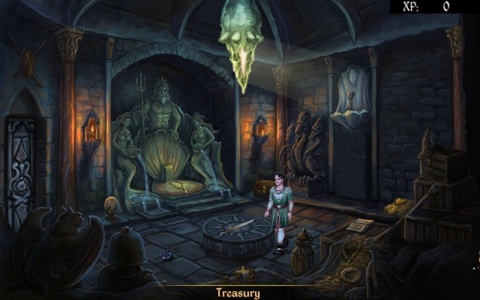 Himalaya Studios has evolved from AGD Interactive, who made a VGA remake of the original King's Quest game and created the original Al Emmo and the Lost Dutchman's Mine. Their Kickstarter project is another original adventure game, in the style of Sierra's hybrid RPG/adventure Quest for Glory series.

The graphics have the beautifully handcrafted feel to them that is reminiscent of King's Quest V and VI, as well as Quest for Glory III and IV, but there will also be some features rarely seen in adventure games: an extensive combat system and the ability for the user to choose between the Sierra style icon bar or the LucasArts style verb coin.

If the game is successful, there may be sequels where you can import your character to continue progress, a feature also inspired by Quest for Glory. 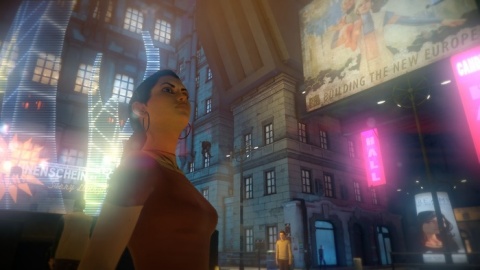 The Longest Journey was one of the few high profile adventure games made around the turn of the century. If the fact that it came on 4 CDs didn't reveal it already, trust me when I say this is a vast game. Unlike most adventure games, its puzzles are rarely inventory based, instead relying on presence and dialogue to further the intricate storyline.

Designer/director Ragnar Tørnquist followed up the point and click adventure that was The Longest Journey with a 3D action adventure in a highly detailed world. This next game in the series, Dreamfall, is not a true sequel, but followed the storyline of another character, set after the events of The Longest Journey. It too, is an astonishingly detailed and huge, primarily story-driven game.

Dreamfall Chapters is under heavy development and, as the name implies, will be released in episodic format and I look forward to playing the first episode when it is released. The indications are that they are on track for release of the first chapter this autumn, which would make it the first Kickstarter campaign I've backed to meet its scheduled date. 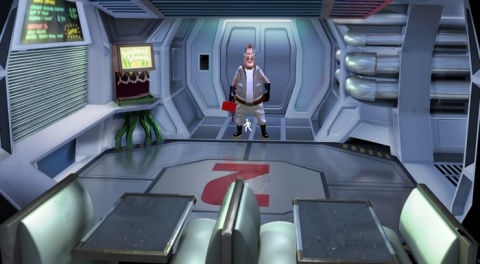 The Two Guys From Andromeda is what Space Quest creators Mark Crowe and Scott Murphy named their team. Together they created the sci-fi spoof adventure game series Space Quest, collaborating on the first 4 games in the series. As they do not own the rights to Space Quest, they're coming up with a new concept in a similar vein.

Being a sci-fi geek, Space Quest was the very first adventure game I ever played and the series remains one of my favourites. This project barely made its funding goals, despite an astonishing number of backer rewards and updates promoting the Kickstarter campaign, including a simple proof-of-concept minigame.

The difficulty in reaching the funding goal has really surprised me. This is one of the games I'm looking forward to most. Although development has been progressing slower than originally anticipated, if their first playable demo is anything to go by, it's gonna be worth the wait. 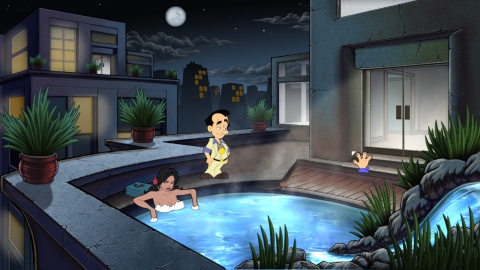 Leisure Suit Larry in the Land of the Lounge Lizards was a Sierra AGI adventure game about a geeky loser who was determined to finally lose his virginity in the city of Lost Wages. The game itself was based on the fully text-based Softporn Adventure, adding semi-3D graphics, bleepy-bloopy sound, and Al Lowe's particular brand of humour. The AGI version was later remade in 256 colour VGA with a point-and-click interface and sound card support,

Replay Games, with the involvement of original LSL creator Al Lowe, brought the game into the modern age with orchestral music and fully HD graphics. Leisure Suit Larry Reloaded is quite faithful to the original, while also adding a new girl for Larry to "conquer" and making some changes to some of the puzzles, making walkthroughs of the earlier games obsolete.

The development process seems to have been rocky, even switching development teams entirely at one point. Still, the game was released and is a solid version of the classic game. I'd very much like to see them apply a similar treatment to the later Larry games (which were already more interesting than the first installment in their original incarnations). 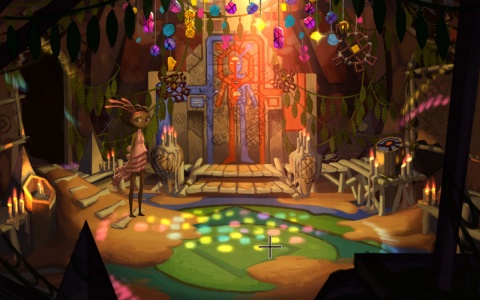 Broken Age started out as Double Fine Adventure and was the Kickstarter campaign that sparked the interest in crowdfunding adventure games. As the campaign was perhaps a little too successful for its own good, the scope of the game expanded dramatically and Schafer and Double Fine overstretched. Although the initial goal was to release a full game after a mere 5 months, Broken Age was split into two parts, with the first being released in early 2014.

The team will be using the revenue from the first act to help fund development of the second act, which will be released as a free update. You can buy the game through Steam and, though relatively short, it is a highly polished adventure game with an intriguing plotline. Check out my review of the first act.

Bill Tiller, who worked on The Dig, Curse of Monkey Island and created Vampyre Story deserves special mention, as he was involved in at least 4 Kickstarter adventure game campaigns, 2 of which are currently still open at the time of writing. If Vampyre Story and his LucasArts work are any indication, both Duke Grabowski and Kaptain Brawe 2 are certainly worth backing. The funding goals for these projects are quite modest, too. So go support them!

Like many projects on Kickstarter, the developers often come up with a large number of tiers from which to choose your support level. T-shirts are particularly frequently seen rewards, as well as downloadable sound tracks or piece of concept and game art. In many cases, you might even opt for a physical copy of the game when it ships. I find that option particularly appealing, but for the most part I think I'd prefer money being spent on the actual game development rather than swag.

Another thing that stands out is the timeframes. All the projects that were successfully funded have gone way past their estimated release dates. This is in part due to the increased scope of some of these projects, and in part due to underestimating the time and effort it takes to build an adventure game from scratch. Even the veterans fall into this trap. With the vast increase in graphics quality and things like writing and recording dialogue, the days of Sierra churning out a new AGI adventure game in glorious 16-colour EGA in a matter of months are long past. These projects can take many man-years to complete. That some projects have been released and others are still being worked on nonetheless is a testament to the blood, sweat, tears and love the creators put into them. When you back a game project, be prepared to wait a long time to see the fruits of your investment.