By now, everybody and their grandmother seems to know about Bitcoin and the trouble at Mt. Gox (seriously, is there anybody who does not pronounce that "Mount Gox"?), even if they have no idea what a cryptocurrency is. Then there's other exchanges that have similar problems, Bitcoin's wildly fluctuating value and its association with criminal activity like on Silkroad. But still, cryptocurrency is an interesting concept. There are several alternatives to Bitcoin, sometimes collectively called Altcoins and one of those in particular, Dogecoin, caught my eye. 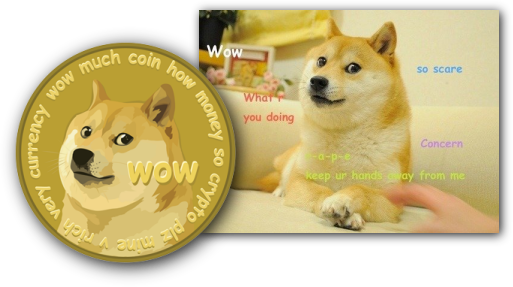 When Emin Gün Sirer wrote about the trouble at Mt. Gox, he had an interesting tidbit at the end:

If one must pick a cryptocurrency, the lowly dogecoin, of all things, is doing everything right. It's based on economic principles that provide the right incentives for a healthy economy. The community does not take itself seriously. Most importantly, no one pretends that Doge is an investment vehicle, a slayer of Wall Street, or the next Segway. No one would be stupid enough to store their life savings in Dogecoins. And people freely share the shiba goodness by tipping others with Doge. So, young people who are excited about cryptocurrencies and want to get involved: Dogecoin is where the action is at. Much community. So wow.
— Emin Gün Sirer

This already sums up the most important facts about Dogecoin. It is a relatively new cryptocurrency, having celebrated its 100 day anniversary just last week, yet there is indeed an entire community for Dogecoin. While the community is serious about promoting the currency, it certainly doesn't take itself as seriously as many other currencies. For example, the official Windows client uses Comic Sans as the main font in its interface. Also, check out the text on the logo, as transcribed in the title of this very post. Even the name itself comes from an internet meme. The dog looking decidedly freaked out in the picture is a Shiba Inu. Hence, Dogecoin afficionados are called Shibes.

Although the Dogecoin community applies the "To the moon!" catchphrase to the value and adoption of Dogecoin, the currency is presently valued at under $1 for 1000 DOGE. There will be far more Dogecoin than Bitcoin, as nearly 100 billion Dogecoin are expected to be mined by 2015 and there is no hard limit, so there will continue to be some inflation as well as incentives to keep mining whereas there is a limit of 21 million Bitcoin. These aspects of the currency mean it's much less likely to invite financial speculation in Dogecoin and goes well with the giving culture in the community.

The Dogecoin culture is very much alive on Reddit, where Shibes enjoy tipping each other and interested Redditors with some Dogecoins. These random acts of crypto-kindness are not just limited to friendly tips, but there are also several causes that the community rallies behind. For instance, a NASCAR team sponsored to race via Dogecoin or even bringing clean water to remote areas of Kenya. One can't help but admire a community that considers charitable giving a major aspect in promoting the currency, made official through the Dogecoin foundation.

And even if charity doesn't win you over, there are plenty of other ways enthusiastic Shibes have found to promote Dogecoin. From free wallpapers and images, via Super Doge – a Flappy Bird clone that lets you win Dogecoin (now unfortunately barred from the Google Play Store and only slightly easier than mining for Dogecoin by hand), to a Doge-flavoured variant of the popular 2048 game.

Cryptocurrency may be a huge success or go down as a failure. But either way, the Dogecoin community has rather uniquely succeeded at making their altcoin fun. And to keep with the spirit of giving I'm gonna give away some random amount of Dogecoin to anyone posting their Dogecoin wallet address in the comments below (once per user, while supply lasts). And if you're a rich Shibe feeling charitable, you could do the reverse and donate to me at DSUDVCzzxZ53yXb4b1VegYoHCDYnS5GECB.

Sidebar: What is a cryptocurrency?

The currency we are familiar with in daily life was once representative of a certain amount of gold being stored in a national bank's vault somewhere, this is no longer the case. Bank notes and physical coins have little if any intrinsic worth and the value we ascribe to them is one of trust. It is now fiat money. In cryptocurrency, trust is backed by mathematics rather than by a valuable commodity. Each transaction that takes place using a cryptocurrency is verified by carrying out a large of number of difficult computations. This ensures that the transaction is genuine and ensures that one cannot simply create more money out of thin air and new currency is created only by means of "mining" for it. Mining is done by having your computer, graphics card or even a specialised machine process transactions. When a block of transactions is successfully verified, the user (or more likely: pool of users) doing the mining is rewarded with the newly created Bitcoins from that block and a transaction fee.

Cryptocurrency makes use of a "block chain", which is like a log of all transactions ever executed. From there, the history and current owner of every cryptocoin in existence can be tracked. Your personal wealth is associated with a "wallet" identified by a secret key (which only you should know) and a public key (the wallet's address, which you can disseminate publicly). This wallet does not actually contain anything such as in a local file on your computer, but like a bank account number, it gives access to the money that the block chain associates with it.

I want to collect Doge coin I try mining but it is not successful, I tried Investing 10,000 Doge coin at bitdoggy.top last year 2017 it goes to scam.