If, like me, you grew up in the 80's and 90's, you know that there's only one thing that can follow the words "Duck Tales" and that's "Woo-oo!". You can probably even sing along to the theme song. Apart from the highly popular TV show, there have been several video games about loveable old miser Scrooge McDuck and his three nephews. Very much a product of the time, the NES version of this was a platform game. It is considered by many to be among the best such games ever made. Now, more than 20 years later, WayForward Technologies has updated the iconic game for the modern age. Is that a good thing? Let's find out!

When you start Duck Tales (woo-oo!) Remastered, you will be greeted by two things which immediately set the tone for this game: a beautifully painted title screen showing Duckburg and the music that played over the end credits of the TV show. The title screen is drawn very much in the style of the backgrounds as seen on TV. In fact, WayForward were able to get them drawn and painted by artists Mike Peraza and Rick Evans who had both actually worked on the TV series. It looks absolutely gorgeous, has subtle parallax effects and the only way it could possibly be improved upon is if it actually had Scrooge's famous money bin in it too. Then there's the music. The first few notes sound entirely like the NES version of the catchy tune and it gradually expands, adding orchestral sound while integrating and maintaining the chip-tune style NES sound. To me, it sounds awesome and is a great testament to how much attention to detail WayForward have put into making this game, ensuring it's not just any remake, but a proper homage and tribute. 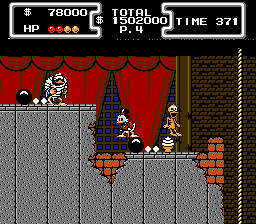 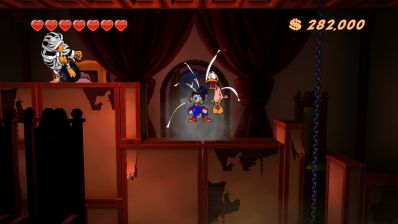 WayForward have made sure to keep true to the original game as much as possible, modernising the game, keeping the good things intact while also addressing some of its shortcomings and at the same time expanding on the Duck Tales (woo-oo!) feeling. The screenshots above (of roughly the same place in the game) should give a good example on how much the graphics have been updated. All the animations and Scrooge's poses have very obviously been based on the ones from the NES game, but are much smoother and more in line with the TV show. The NES' limited colour palette didn't really allow for Scrooge's coat to be blue as it was on the show and still look good. In 2013, that is no longer a concern.

If the Duck Tales (woo-oo!) theme tune is famous from TV, the NES platform game had some pretty darn good original music for its levels too. A fan favourite is the background music for the Moon level and that is indeed a great piece of music — I swear at least 50% of fan excitement was about the moon theme. In this remake, all of the original melodies have been arranged as full orchestral scores. Composer Jake Kaufman obviously had a great love for Hiroshige Tonomura's original themes and he didn't mess with the compositions too much while bringing them up to date. A very neat touch is that it is also possible to play the game with the music in glorious 8-bit style for that extra retro feel. Over the end credits, there is even a piano version of the famous moon theme. That said, I still think I prefer this fanmade version ever so slightly. 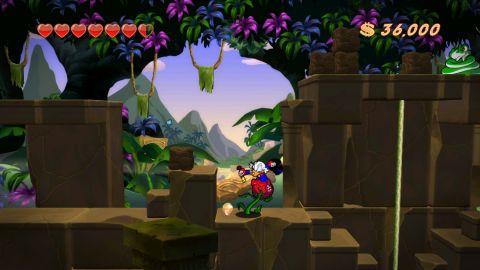 Okay, so the graphics and music are up to snuff. What about the actual gameplay? Duck Tales (woo-oo!) Remastered keeps its levels in the layout of the NES classic, with even the secrets in the same place. That is not a bad thing as they were nicely designed. The original came could be completed very quickly (by exploiting a glitch, even in as little as 8 minutes) and much of the game could be bypassed. In this remake, WayForward have addressed this by adding to each level a set of items Scrooge needs to collect in order to progress to the level's boss character. Having to collect all of them ensures that you will see every area of the game. Just in case you have trouble finding them, they are clearly marked on the in-game map screen for each level. I'm a little torn about whether that map is a good idea, as it makes exploring the levels a tad too easy. Then again, you're in no way forced to use the maps. Despite the game's playtime being extended in this way, it is still very short. I'm actually terrible at playing platform games, so I played on "easy" setting and I got through the entire game in a little over 3 hours, taking plenty of time to admire the updates, the music and the cutscenes. 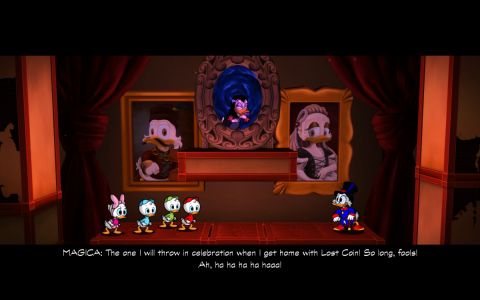 Speaking of cutscenes, they are another way in which the game has been enhanced. The NES original did not have much in the way of plot and the reasons for characters to show up at certain points were similarly non-existent. WayForward have added quite a few, giving the non-player characters a more important role to play as well as adding an overall story arc to flesh out the story. It still doesn't make much sense for Mrs. Beakley to show up on an alien spaceship on the moon... she says she's there to see how her pie crust holds up to the vacuum of space... riiiiight. Contrived, but it did made me laugh out loud. In all, the cutscenes match the spirit of the show quite nicely and the situations and dialogue drew quite a few chuckles as I played through them. What really makes the cutscenes so charming is that in addition to the beautifully drawn backgrounds and the expressive animations, the original Duck Tales (woo-oo!) voice cast have reprised their roles. Alan Young is now a respectable 93 years old and it is just incredible that he has once again provided his distinctive voice to bring Scrooge McDuck to life.

Other ways in which the game has been expanded are nice touches such as the ability to swim around in Scrooge's money bin, using the money collected in the game to unlock pieces in a gallery revealing concept art, music, character sheets and the like. You'll need to play through the game several times in order to unlock them all. The boss fights in the original game were limited to a single form of attack and each boss could be dispatched easily by using Scrooge's cane to bounce on the boss' head a couple of times. In this version, the bosses have some more varied and random attacks. Although not very difficult, it does make the boss fights more fun. And last but not least, the final level has had its setting changed (from Transylvania to Mount Vesuvius) been made a bit more challenging giving a more satisfying ending to the game.

While I think Duck Tales (woo-oo!) Remastered is pretty much a perfect remake of the original NES platformer, both staying true to it as well as lovingly bringing it into the present, it does have some flaws. As I mentioned before, the game is still rather short. Second, despite the beautiful 3D backdrops it is still essentially a 2D platformer with sometimes slightly dodgy collision detection. You may find Scrooge getting stung by a spike or hit by an enemy when you wouldn't expect it. This doesn't ruin the gameplay by any stretch of the imagination, though. Even for sheer nostalgia, this game would definitely be worth the price ($15 to $20 for the PC version, depending on where you get it — an even greater bargain when you keep in mind that the NES version, like most NES games, would have set you back $60 or so in 1989). With all the neat touches and attention to detail there is more than just nostalgia and Duck Tales (woo-oo!) Remastered is a great little game in and of itself and I rate this game 9 out of 10 (4.5 stars).

Duck Tales (woo-oo!) Remastered is available on PC, PlayStation 3 and Nintendo Wii-U as of August 13, 2013, with an Xbox 360 version to follow on September 11, 2013. Digital downloads are can be purchased through sites linked from Capcom's page as well as through Steam.