Advertising server software OpenX is reasonably user friendly to work with, but also quite insecure and buggy. One of the bugs I came across was that it misidentified Flash banners compiled with Flash version 11.4 as requiring Flash Player 17 (which doesn't exist). Since OpenX checks the version of the Flash plugin against its perceived minimum requirements, this meant that a few ads simply wouldn't display. Here's the fix to the OpenX code. 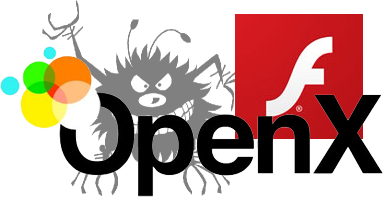 The problem lies in OpenX misinterpreting the version field in the SWF file. Up to and including version 10.1 of the Flash compiler, the 4th byte of the compiled SWF file would be the major version of the compiler. Version 10.2, however, uses the value 0x0B (decimal: 11) and subsequent minor versions have also increased the byte value. OpenX fails to take this into account.

Find the following function in www/admin/lib-swf.inc.php (relative to your OpenX base install directory):

And change that to:

That should handle SWF files built by Flash compiler versions 10.2 and later, at least up to 12.0 (the current version of Flash, at the time of writing), but may need updating when Flash 13 is released (if that unfortunate event ever occurs). It doesn't differentiate between minor versions, as the OpenX table structure doesn't allow for that. But then, anybody who has an older version of the Flash plugin should have their internet browsing license revoked immediately anyway.

Update (2014-03-03): updated the code to correctly identify content for Flash Player 12, according to values in the Flash Player and Air Feature List.

It works! Thanks! You should do commit to openx repository.

Thank you so much for this!!

Thank you! Saved our day!

I hope you don't mind, but i have submit this as a critical bug in openx. So that it will get officially fixed.

You save our day!

You're a lifesaver, thanks a looott !

This fixed the ads not showing up...

But looks like the destination url still does not work.
Banner are not clickable anymore.

Because of you it took me only 2 minutes to get rid of that bug.

Thank you!
that fixed perfectly!

Life-saver stuff right there. Thank you.