Saving the day, the McPixel way - I laughed

When indie developer Sos found his game being pirated on the infamous Pirate Bay he did something very unusual. Rather than complain, he actually posted in the torrent comments and gave out a couple of free registration codes for the game. Some may call it a clever marketing ploy, but from everything Sos wrote in the Reddit AMA shortly afterwards, it seems like he just really enjoys seeing others enjoy his game. I'm not going to write a post in praise of Sos' reponse (awesome though it was), but just a little bit about the game itself. How does one save the day, the McPixel way? 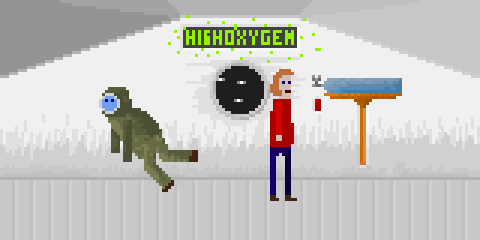 Simply put, McPixel is an antisocial asshole. He also happens to save the day, whatever the cost. And he does it every 20 seconds. He will kick everybody he meets in the gonads and whack them over the head with whatever he finds, because he's just such a swell guy.

This weird game, with it's quaint graphics, takes the titular character through 100 levels. On every level, there is an explosive, usually a bomb or a stick of dynamite. It goes off after 20 seconds, unless McPixel saves the day. But he has his own way of doing that. One of the early levels has a stick of dynamite disguised as a hot dog on the beach of a tropical island. So what do you do? Do you throw it into the ocean so it fizzles out? No can do. That would be too normal. You can put ketchup on it, after which McPixel helpfully decides that the best way to deal with a ketchup-covered stick of dynamite on a hot dog bun is to bang it into his face. The solution? Pick up the explosive hot dog and "feed" it to a set of red eyes hiding in the background. Those belong to an alien that is smoking pot. Once it has eaten the bomb, it'll ask for mustard to go with it. Logical, no?

Some of the 100 levels have simple solutions. Many are contrived beyond belief. Rarely will the solution be what you expect it to be. In almost all cases, it'll be hilarious. And even if the solution itself wasn't to your liking, many of the alternatives (all of which result in things being blown up) will be. Remember, the goal is to keep whatever place shown on the screen at the start of the level from blowing up. If you have to save the moon and end up destroying the earth in the process, meh, that's a win. The moon is saved and that is all that matters. McPixel himself doesn't need to survive and something worse than an explosion might occur, but all that doesn't matter. If you fail, don't worry, you get infinite retries.

The first few levels had me a little frustrated as I hadn't gotten used to the game's odd sense of humour, but after a few minutes I was hooked and finished all 100 levels back to back (at 20 seconds a shot, that won't take as long as you might think) and went back to find all the gags to unlock the extras. It's the weirdest game I've played in ages and it's been a thoroughly enjoyable experience. Give this game a try, and given how awesome the game and its designer are, pay for it too. It's available for Windows, Mac OS, Linux, iOS and Android (including a free lite version) and should soon be on Steam as well. Right now it's on offer for a mere €0.79 (a 90% discount) on Desura for a day. Even at the full price, it's well worth it though. More free DLC is on the way, too. A simpler version of the first few levels, as created for Ludum Dare 21 can be played online.

Play through the game yourself first and only afterwards, check out the awesome playthrough by Jesse "One Moderately Funny Gamer" Cox on YouTube. It'd spoil the game to view it first, but be sure to watch it after playing as Jesse's reactions to the game are both recognisable as well as priceless.