How to beat the boiler room boss in Aquaria

Aquaria is an awesome game that I got as part of the humble introversion bundle. It's quite an expansive game and I really enjoy it, though the boss fights can be very tough. One boss in particular: the golem in the boiler room in the Sunken City, if you don't know what to do. Spoilers after the break. 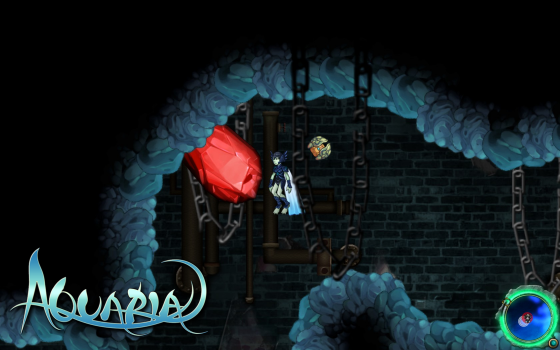 In the boiler room, switch to beast form (3) and swim up against the current through the pipe to the upper area. There are three boulders there. In normal form (1), use the bind song (0) and bring them to the ghost boy in the lower area. He will use them to create a statue. Once the statue is complete, a large golem appears and a small female wraith creature. Your regular energy mode shots do not affect the wraith and pass through her, while the golem is impervious to any attacks as long as he is green. Occasionally he stamps his foot a few times, then charges at you, which is easily avoided by staying above him. Mostly, he'll attack by jumping at you. There's no place you can stay out of harm's way. The best way to avoid damage, is to stay pretty close to him, just in front of his face and when he jumps, dash away (   Space   ) from him just before he hits you.

Every few attacks, golem stops and the wraith swims up to his face and touches it. He then reaches a hammer to his head and a small jellyfish-like creature is released from his brain. In the beast form (3), dash at this creature and you can then fire it as a projectile, but only in the direction of movement as is customary for the beast form. This projectile is the only thing that you can use to shoot at the wraith. It is tough to hit her, but when you do, the golem flashes red for a short time. During this time, he is vulnerable to your shots, so switch to energy form (2) and let him have it. After a while, the wraith will start shooting at you too. Ignore her and concentrate all your fire power on the golem and he'll go down soon enough. I recommend using some items that increase defense, speed and energy shot for this boss fight.