You may have seen the latest well-publicised PayPal horror story. I've seen plenty of them too and was never really bothered about them, figuring those people might have brought it on themselves. Well, not anymore. Now that I have my own experience to add to the list, I'm done defending PayPal and have actually closed my account. PayPal not only inconvenienced me in several ways, but their communication actually contained blatant lies, not to mention the whole thing being drenched in incompetence. I have zero tolerance for that kind of crap from any company that has anything to do with my finances. Here's what happened. 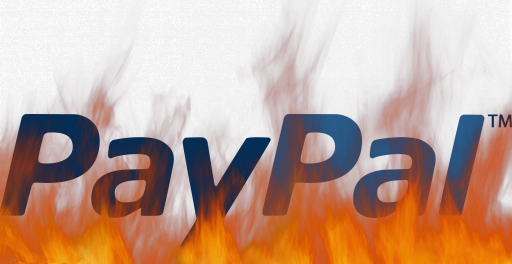 I am a Dutchman and was recently travelling through the United States with a friend. While I'm was there, I bought something off eBay and paid for it using PayPal. Such payments have always been instant but all of a sudden there's a 7 day waiting period for something called an eCheck to clear. By the time that will have happened, I would already have left the US and needed to make other arrangements for shipping the item I bought. The following day, the friend I was travelling with needed to pay me a considerable sum and since he didn't have access to his electronic banking system while in the US, he sent the money to me through PayPal. Within minutes, I received an e-mail informing me of the transaction, which is fine. The following day, however, they don't just delay but actually cancel the transaction and worse: block (or "limit", they call it) both his account and mine. The company is obviously misnamed as paying a pal is not possible. The e-mail I get tells me I've been selected for a random security check. Given that they cancelled the transaction and blocked not just my account, but also that of my friend, there is nothing "random" about it. If they had said my account had been accessed from an unexpected location, that would have been fine, but this is a boldfaced lie. That unforgivable sin means PayPal instantly forfeits any trust I may have had in it and that alone is enough for me to want to close the account. My friend gets that same crap.

To make things worse, they force me to change my password and security questions. After that, they attempt to make me jump through the extra hoop of sending them a recent utility bill or a bank statement. Well, guess what, even if I didn't think that was an invasion of my privacy, I don't exactly have those on me when I'm travelling on the other side of the world. In any case, I don't recognise their right or authority to ask me for proof of where I live when they've never had any compunctions about that in the past 10 years. I don't even concede that such a piece of paper (which can be easily forged) would be any proof of identity whatsoever, nor does it have any bearing on the situation. Even back home to the Netherlands, I would actively refuse to send it to them. To add insult to injury, PayPal's "contact us" page claims that "help information is not available in English yet" and goes on to recommend that I change my language preference to English. Seriously, what incompetent idiots are they? (Complaints about that particular situation can be found on Google dating back at least 5 years)

When I finally did manage to get through to the well-hidden contact form and submit the message, there is an automated message acknowledging receipt, followed by silence. Since PayPal is obviously a company of sodding morons who don't give a rat's ass about customer service and cannot be trusted in any way, I had the account closed as a matter of principle. The customer service person representative that I had to put considerable effort into getting to talk to on the phone was able to lift the limitation instantly and promised to close the account. Of course, that didn't happen so I still had to do that myself. They ask you no less than 7 times whether you're sure you actually want to close the account. Even that is a painful process.

It's a pity there are no competitors to PayPal that offer a similarly convenient and widely accepted form of payments. The only serious contender that I've seen so far is Dwolla, which unfortunately is not yet available outside the US.

Go to the PayPal front page. Make sure you are not logged in. If you get a localised version (I get Dutch, despite my preference for English), click the language at the top right and choose "United States" as your region, finally enabling selecting the English language. When you see the English-language homepage, click "Contact Us" in the footer, then select either "Call Us" followed by "Call PayPal Customer Service" or "Email Us" followed by an other "Email us". Do not log in on the following page, as it will take you to the localised version making the contact form inaccessible. Instead, choose the "Continue" button in the "Unable to log in?" block. Then, you should get an actual contact form.

Alternatively, there is a list of PayPal telephone numbers and e-mail addresses available online.