Never thought I'd have a legitimate reason to call 112 (the European equivalent of 911), but I just did. About an hour ago (4 am or so), I went for an early morning walk... or rather a late night one as I couldn't sleep. Roughly halfway, I noticed what looked like a large bonfire in another street. This turned out to be a conifer hedge on fire. 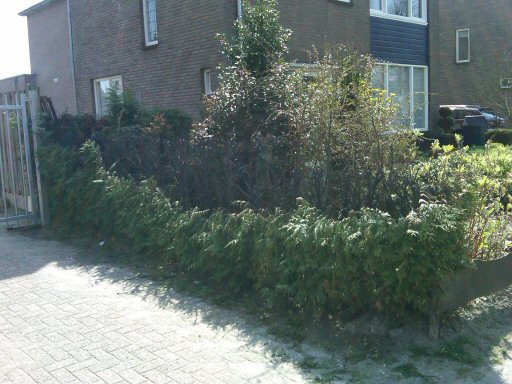 Those things burn pretty well, apparently, so I called the emergency number and informed operator of what I'd seen. In the meantime, I tried waking the people in the houses on either side of the hedge, to no avail. (I wonder what they'll think when they see their garden). Within five minutes, the police arrived and maybe two minutes after that, the fire brigade. Although the hedge was pretty much gone, the fire stopped just short of a large wooden fence and the firemen hosed it down for good measure so it wouldn't catch fire from the smouldering remnants of the hedge.

how bad was it and why would someone do that?

It didn't end bad, fortunately, as the wooden fence or other plants didn't catch fire. I'm not sure if somebody started it, as I didn't see anyone. Maybe somebody just threw a smouldering cigarette butt into the hedge, not realising what would happen.