The Silver Lining followup, an interview with the team

Earlier this month, I expressed my frustration at Activision pulling the plug on fan-made The Silver Lining, a previously officially sanctioned sequel to Sierra's famous King's Quest games. I'm not the only one outraged by this, and several efforts are underway by the fan community to get Activision to change their mind. There is an online petition that can use your help and a letter- and e-mail writing campaign is also in progress. I've taken part and hope you will join in too. 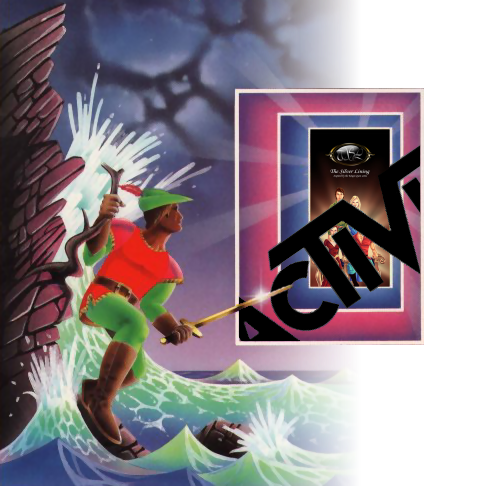 Hurting their own bottom line

When previous fan-projects, such as the VGA remakes of King's Quest 1 and 2 by AGD Interactive were released, it spurred new interest in the adventure game genre and the King's Quest games in particular. Old fans were reminded of these classic games, sparking them to purchase the King's Quest Collections, and many younger gamers who also played these revisions were introduced to the series. It is more than likely that the release of The Silver Lining would have a similar effect, and that Activision could potentially make a profit from this fan-made project. By attempting to quash the release of The Silver Lining, they generate not only bad publicity and animosity among adventure game fans, but even pass up the opportunity to get extra revenue from a surge interest in their franchise that results from a fan-game without any effort or investment on their part.

Interview with the team

As a followup to my previous posts, I was presented with the opportunity to pose some questions to the TSL team about the project and the recent Cease and Desist order.

TSL was one of the most ambitious fan projects out there, being in development for a whopping 8 years. In all this time, an astonishing amount of work and TLC must have gone into it. How many people have contributed and could you give a rough estimate just how much effort these volunteers have put in?

Over the course of eight years, over 150 individuals contributed towards the development of TSL through writing, art, audio, programming, testing and public relations. It's impossible to estimate how much effort people have put in, as this varies from person to person. Some people have put in 1-5 hours/week, while others have spent more than 40 hours/week.

What do you believe was the thing that most set TSL apart from other fan projects, such as the hugely popular Tierra Entertainment remakes of KQ1 and KQ2?

There are a couple of obvious things that sets this project apart from other fan games. Firstly, it was written as a sequel to the series meant to expand the universe and give proper closure, meaning it contains completely new material, as opposed to a remake whose goal is to stay true to the original while slightly modernizing its look & feel. Secondly, our game is 3D, meaning the art process included 3D modelling, texturing, and animation after all 2D work had been completed.

Before Activision/Blizzard entered the playing field, it was parent company Vivendi that had acquired the rights to the Sierra IP. They too had sent a Cease and Desist order to the TSL team, but thanks in no small part to a campaign set up by the fans, a compromise was reached. What were your experiences dealing with Vivendi and what were the terms of the agreement?

Vivendi seemed to have a much more open mind after issuing their C&D. We asked them to evaluate our game, and they were willing to change their mind. The agreement we received basically allowed us legal permission to use Sierra-based IP in our game non-commercially.

TSL was to be released in parts, with the first episode close to release and due for approval by Vivendi/Activision. Did you get to submit that first episode or had they already sent their takedown request prior to submission?

We had sent both Vivendi and Activision the first episode to evaluate. Unfortunately, neither party was willing to look at the game until all legal matters had been resolved.

The takedown notice came as quite a suprise to me as an outsider. Was that any different for you? Could you characterise the team's sentiments and reaction to the takedown request?

Since the directive staff had been through all this before with Vivendi, we were far more prepared and decisive. The staff was supportive of our decision to comply with the request and remove material from the website. We told them that we would be maintaining an open dialogue with them throughout this process, keeping them informed of any new developments. Though we've always known this was a possibility, we were all disappointed by Activision's decision. We're not done trying to work this out, however, and clearly our fans aren't ready to let go either!

A new campaign is underway with fans petitioning Activision to reconsider. I've signed the petition and sent the letter. What do you think the chances of success are?

Thank you for that! We know for a fact that the campaign made a difference in the past during negotiations with Vivendi. At one point, we were even asked to intervene. It's impossible to say for certain whether it will succeed again or not, but we would still like our fans to try. One letter could make all the difference, and we truly appreciate all that they have done and are doing.

If Activision don't reconsider, what are the team's plans? Will they abandon the project entirely or possibly rework it to "disconnect" it from the KQ universe?

If the campaign does not produce any results with Activision, the team will consider reworking the game and removing all traces of King's Quest IP. It is by no means a simple task, but we would prefer to do that than to abandon eight years of hard work and sacrifice. We're also considering moving in a new direction with entirely original games that we've been discussing. There are a lot of possibilities of what could happen next, so we're being sure to consider them all and choose what's best for us a team.

Feel free to add anything else you'd like to say.

We would like to thank all of our fans and supporters out there for all their words of encouragement during this difficult time. The best way to show your support is to participate in the Save TSL Movement. Please visit our website for details and news on any new developments.

I'd like to express my gratitude to the TSL team for answering these questions and the countless hours of effort they have put into making the game, and to David Reese of the Save TSL! effort for making the interview possible. Once again, I urge adventure game fans to sign the petition, send a letter, an e-mail, anything you can do to impress on Activision that they're doing a huge disservice to loyal fans of the classic games and thus ultimately to themselves.