Profanity filters - when the cure is worse than the ailment

There are some online games that I enjoy playing. What many of those appear to have in common nowadays is that there are profanity filters in them. Personally I think that is a monumentally stupid idea. There are two reasons for that. The first is that it is a very ineffective and hypocritical form of censorship. I've never understood why people, especially Americans, (at least in public) condemn the use of certain simple words and go positively ballistic at the sight of even mild nudity, yet live in a society that glorifies violence to the point where the "right to bear arms" is a part of the country's constitution and many people make use of that right. I can sort of understand that parents don't want their kids to be bombarded with expletives, but can those same parents honestly say that they never swear themselves? I doubt it very much. Many are indeed terrible hypocrits and say they "won't swear in front of the children". As if no child hearing a curse suddenly makes it better. The parents learnt those words, the kids will too. Filtering them in a game isn't going to prevent that. If you really think swearing is that bad, then it won't do to keep your children ignorant, but you need to set the right example for them and explain to them what it is they shouldn't be doing and why they shouldn't be doing it. 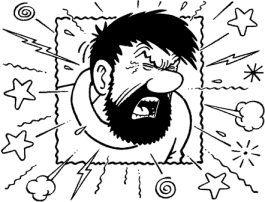 My second reason for despising profanity filters is how they can make innocent things look offensive. This gets worse the "smarter" the filter gets. If people really want to swear, they'll always find ways of outsmarting the filters anyway, often simply by interjecting spaces or using leetspeak. This only means the filters misfire even more often. Misfiring filters make perfectly normal phrases seem offensive and even human moderators tend to get their knickers in a twist at innocent players. Here's a few real life examples:

That last and most recent instance is actually what prompted me to write this blog post.

Not once– let me repeat and emphasize that: NOT ONCE have I seen a profanity filter have a positive or wholesome effect. Without exception, I have seen them give rise to misunderstandings and create offence where there was none. I'm somebody who doesn't swear, simply because I don't see a need for it and when somebody else does it, well, I could only care less if paid to do so. In the rare cases where I do feel offended or, more likely, get annoyed at a person's swearing, I'll simply hit the ignore button. Besides, it is quite possible (and much more fun) to insult people using otherwise perfectly polite words. So, if you are one of those people who think profanity filters are a good idea, I think you're a dense, hypersensitive conservative with the cranial capacity of a Neanderthal that happens to be filled with a vacuum leaving your intelligence at a level slightly below that of the average clothespin and you can just *** *** or ^*$%&#@!!